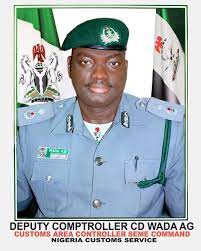 The Katsina Command of Nigeria Customs Service (NCS) said it impounded contraband worth N50.379 million from smugglers in the past one month.

“After careful analysis, we valued all the goods and properties seized with Duty Paid Value of N50, 378, 800,” Chedi said.

The customs boss explained that the goods impounded included 486 bags of foreign rice of 50kg each, 197 jerry-cans of 25 litres vegetable oil, 98 bags of 50 kg foreign sugar, 304 cartons of foreign macaroni.

According to him, the vehicles seized included a Howo Tipper Truck, a Toyota Corolla, a Man Diesel Tipper 32240.

Also impounded were one Honda Accord EOD, one Volkswagen Passat, one Peugeot 504 and one Citroen Space Wagon Bus.
Chedi said that NCS would not relent in sensitizing the people against smuggling.

He said that the customs command would not relent in curbing smuggling in the area and assured that government was ready to assist genuine business people with necessary license for importation of goods into the country.