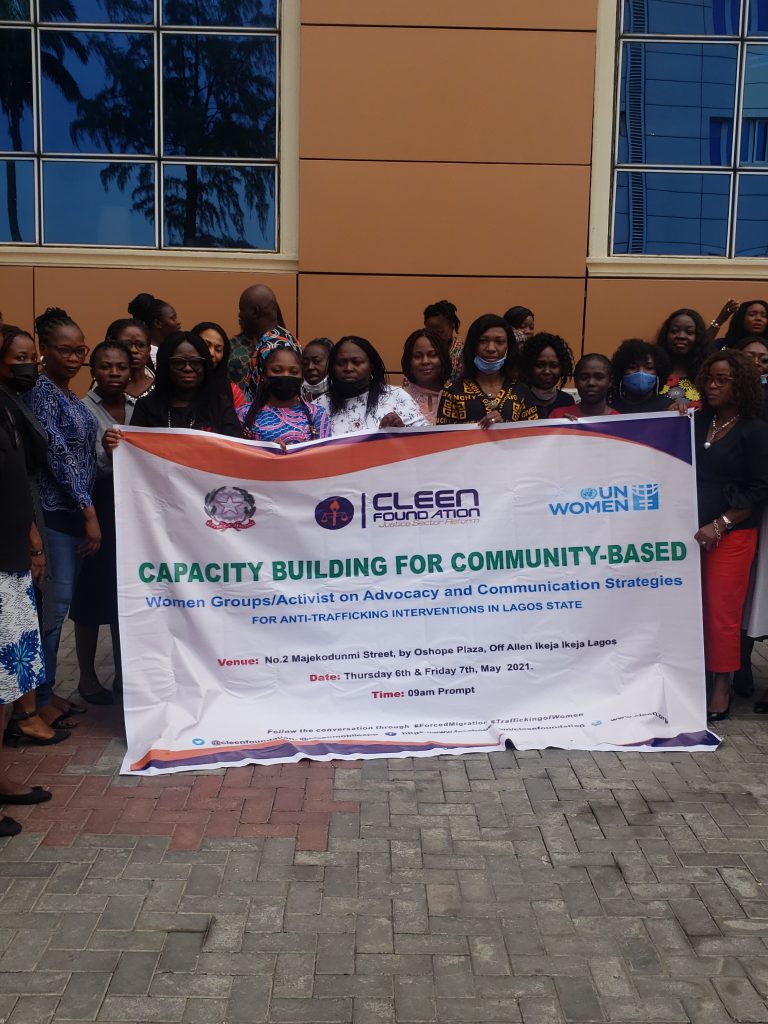 A Non-Government Organisation (NGO), CLEEN Foundation on Thursday partnered  the National Agency for Prohibition of Trafficking in Persons (NAPTIP),as well as the UN Women to forge ways toward tackling forced migration and trafficking of women in the country.

The newsmen report that CLEEN Foundation is an NGO that promotes public safety and security.

The Foundation in a two-day capacity building workshop it organised on Thursday in Lagos  in collaboration with the partners for community-based women led organizations emphasised the need for gender-sensitive policies that would tackle forced migration and trafficking.

Speaking at the workshop, Dr. Benson Olugbuo, Executive Director, CLEEN Foundation, said the Federal Government had enacted a number of legislations to tackle issues of human trafficking, but added that further reviews revealed that some of the laws were gender blind.

Olugbuo represented by Blessing Abiri, the Program Advisor, CLEEN Foundation,, said that it was in view of this that the foundation launched a project in a bid to enable a gender-sensitive policy environment that addresses forced migration and trafficking and increase gender-sensitive information and awareness-raising.

“The project is focused on preventing forced migration and trafficking of women and girls in Nigeria, build resilience and promote sustainable development.

“The intervention has progressed to the level of Capacity Building Programmes for Community Based Women Groups/Activists on advocacy and communication strategies for anti-trafficking.

“It is our expectations that Community Women-Led Organisations after the training will be well equipped to carry out advocacy and enlightenment campaigns to stakeholders such as parents, traditional, religious, youth leaders in communities on the dangers of human trafficking and forced migration. he said.

In his remarks, Mr Sharan Alao,  the Zonal Commander of  NAPTIP Lagos Zone, said community-based women were the best target if the war against human trafficking would be won.

Also,  represented by Mrs Hajara Tunde-Osho, the Public Relations Officer (PRO) of the Agency,  said that  this was because women and children were the most vulnerable preys to human traffickers.

“The sad documented reality is that women and children are the most vulnerable preys to human trafficking and irregular migration, with women constituting over 80 per cent of victims of trafficking for sexual exploitation.

“The problem of Human Trafficking and Irregular Migration has become a great national concern especially with the large number of Nigerians trapped in sexual and labour exploitations in various African and European countries.

“Human Trafficking represents and presents a clear danger to human and national security and must be addressed boldly and frontally.

“The goal here is not to ask our people not to migrate or travel, but to aim for safe and orderly migration with Nigerians especially our women, making informed decisions”, she said.

Also commended the foundation for what he described as a timely intervention to empower participants to be true advocates in the anti-human trafficking cause.

She enjoined the public to shun the act, adding that decline in the demand wiould help to stop the supply of victims.

Newsmen report that no fewer than 45 participants from various women-led organizations attended the capacity building workshop.