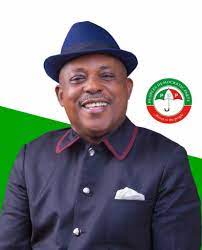 The Peoples Democratic Party (PDP) has advised the Federal Government to intervene in the insecurity situation in Imo and restore normalcy in the state.

PDP National Chairman, Prince Uche Secondus, in an interview with newsmen on Wednesday in Abuja, said the intervention was important to avert more attacks on the state.

“We call on the Federal Government to quickly move in to avert more bloodshed in Imo and other parts of the country.

The PDP national chairman also advised security agencies including the Police and the Department of State Services, to do a thorough investigation, adding that the situation in Imo should not be politicised.

Secondus alleged that intelligence available to the party revealed the state government wanted to rope in some people.

“We warn that this should not be turned to a political witch-hunting to the leaders of the states and former governors, whether in PDP or those in disagreement with the government of Imo state.

“That will cause more problems than good. We must be careful before we turn this to politics,” he added.

Secondus also advised the National Assembly to immediately pass the Electoral Act Amendment Bill and ensure that the bill is assented to by President Muhammadu Buhari.

He said that electoral reform was the key to the transparent, free and fair elections that would restore confidence to the ordinary voters.

He said that if the bill was passed and signed into law immediately, all stakeholders including the international community and the country’s international partners would have more confidence in Nigeria’s electoral system.

“This will also put a check on many sharp practices and everything associated with our elections.

“Transmission of results should be done electronically so that you can cut off the alteration from the wards to the local government areas to the state and to the centre which is Abuja here.

“This was used for Ondo election and it was beautiful.

“So, we are saying as a party, that electoral reform must be passed by the National Assembly and Mr President must sign moving forward to 2023.

“That is the only way to restore confidence. The election must be free and affair. We believe in one man, one vote and all the votes must count.

“As a party, we are ready. We are law-abiding and we are ready to conduct ourselves by the rules.

“We believe that Nigerians will come out in mass to vote for PDP because they have seen the difference. The difference is very clear,” Secondus said.

Secondus urged journalists to continue to be factual in their reports, since truth as the bedrock of the media, remained sacrosanct and unchanging.

In the meantime,  President Muhammadu Buhari has welcomed the release of the 27 students of Federal College of Forestry Mechanization, Afaka, near Kaduna.

The president in a statement by his Senior Special Assistant on Media and Publicity, Malam Garba Shehu, in Abuja, late Wednesday night, congratulated the friends and families of the students over their release.

He also congratulated the government and people of Kaduna State following the happy end to the saga.

The president said: “We are happy they have been released.

“We express our deep appreciation to all the actors who contributed one way or the other to this happy outcome, in particular the defence and security agencies, the officials of the Ministry of Environment and the government of Kaduna State.

”We thank Nigerians for their prayers.”

Buhari called for steadfastness and security awareness on the part of citizens and the law enforcement agencies.

He deplored the increasing politicization of security issues in the country by opportunistic politicians.

The president appealed for the release of the students of Greenfield University and all other citizens held in captivity.

He expressed the strong determination of his administration to ensure that Nigerians lived in ”a country where everyone can move where they want, when they want without the fear of kidnapping and banditry.”