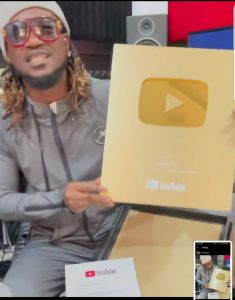 Rudeboy thanked YouTube and also revealed that he got a hundred million views on a single track.

The music star, Rudeboy, who could not hide his joy, took to his Instagram handle @iamkingrudy in a video clip, to announce the great feat to his supportive fans with words of appreciation to them.

“Thank you very much @youtube Dear #firedepartment it’s GOLD baby!! 1m subscribers and 100m views on a single track musically rude @lorrdsky we did it ,” he wrote.

The renowned singer appreciated his supportive fans, who he said with their help made it possible for him to reach the one million mark on YouTube.

The singer in the video clip, showed off the gold plaque sent to him from the headquarters, where he also acknowledged the fact that his fans had earlier earned him a silver YouTube plaque.

He also made reference to the silver plaque behind him which he got when he surpassed a hundred thousand subscribers.

Also read: Why I switched secular for gospel music—Chidinma Ekile

Meanwhile, some fans have been sending him congratulatory message under his IG comment section.

Similarly, @beautifulchevy said, “You deserve it all “.

RudeBoy is a Nigerian singer, songwriter, dancer and performer, who split up from the famous PSquare group.

The singer, who struck out on his own, later revealed that it took him a long time before he adjusted to performing alone.

As a solo artist, Rudeboy released his official solo debut songs in 2017, which include singles such as “Fire Fire” and “Nkenji Keke”.

He dropped “Somebody Baby” in 2018 before featuring Reminisce on “Is Allowed”.

Rudeboy released “Reality” in 2018 and enlisted the input of Dancehall singer Patoranking on another single titled “Together”.

The singer 2019 official debut song “Reason with Me” cleared obstacles on its way to the top of charts.

Since then, Rudeboy has released other singles such as “Audio Money”, “Take it”, “Woman” and “Oga”.

In 2019, the music star established his own record label known as Fire Department Inc. (FDI), he announced the record label via his Instagrame.