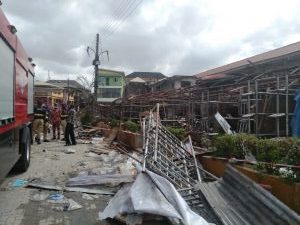 No fewer than 91 shops and four offices were burnt by fire on Thursday night at a popular fabric market known as `Cairo Market’ in Oshodi, Lagos State.

Dr Olufemi Oke-Osanyintolu, Director-General of the Lagos State Emergency Management Agency (LASEMA), told the newsmen on Friday that the fire started at 8.00 p.m. and lasted for hours.

According to him, the cause of the fire is still unknown as investigations were ongoing.

“We sympathise with those that lost their goods to the fire outbreak. I want to say there were no mortalities and casualties.

“Concerning the cause of the fire, we are looking at it wholistically and I assure you we will detect the cause.

“We will continue to key into the vision of the Lagos State Governor, Mr Babajide Sanwo-Olu, which is to ensure safety of lives and property in the state.

“I appeal to all the people of Lagos State to remain calm and rest assured that we are on top of the situation,” he said.

Some of the traders counted their losses and called on the state government for help.

One of them, Alhaja Basirat Adams, told newsmen that she had goods worth N1.5 million in her shop before the fire outbreak.

“I am in shock.  I have goods worth N1.5 million and I don’t know how to recover the money lost.

“I appeal to Lagos State Government to come to our aid because we lost all our goods here,” she said.

A mother of three, Mrs Kadijat Abayomi,  told newsmen that she was at home when she heard about the fire.

“I have been in tears since last night because I just collected some goods on credit. To pay back now is a problem.

“This is one of the saddest days of my life and I just hope someone will come to my aid,” she said.

Another trader, Alhaja Karimot Abdul-Kareem, who was being consoled by other traders because of loss of goods worth about N2.5 million, told newsmen that she would find it difficult to recover from debts.

Abdul-Kareem appealed to the state government to come to her aid.

A trader, who gave her name simply as Madam Kofo, said she would never forget the incident.

Kofo, who said the goods in her shop were worth over N1.5 million, appealed to the government to come to the aid of all the affected traders.

“COVID-19 had much negative effects on us all. We were trying to pick up only for this to happen.

“I don’t know where to start from,” she said.

In a related development,  China’s total imports and exports expanded to 28.5 per cent year-on-year to 11.62 trillion yuan (about 1.8 trillion U.S. dollars) in the first four months of 2021.

An official data from the General Administration of Customs (GAC) on Friday showed an increase of 21.8 per cent from the pre-epidemic level in 2019.

According to the data, exports jumped from 33.8 per cent from a year earlier while imports climbed 22.7 per cent in yuan terms.

The trade surplus increased 149.7 per cent to reach 1.02 trillion yuan in the January-April period.

This marks a year-on-year increase of 26.6 per cent and month-on-month growth of 4.2 per cent.

In April, the trade surplus narrowed 12.4 per cent from a year earlier to 276.5 billion yuan.

The GAC data showed in the first four months that the Association of Southeast Asian Nations remained China’s largest trading partner, followed by the European Union and the U.S.

For the period, the growth rates of China’s trade value with the three trading partners are 27.6 per cent, 32.1 per cent and 50.3 per cent, respectively.

China’s trade with countries along the Belt and Road rose to 24.8 per cent year-on-year to reach 3.43 trillion yuan.

Private enterprises contributed 47.2 per cent of China’s total foreign trade in the first four months, up to 4.1 percentage points from a year earlier.

Their imports and exports expanded by 40.8 per cent to 5.48 trillion yuan during the period.