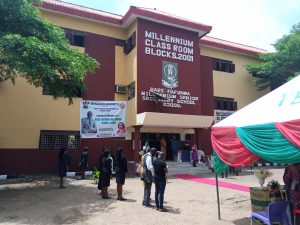 Gov. Babajide Sanwo-Olu of Lagos State on Friday said that his administration had so far completed over 1, 097 projects covering 970 schools across the state.

The governor, who was represented by his Special Adviser on Housing, Mrs Toke Benson-Awoyinka, at the events, said that the projects would accelerate students’ access to world-class learning.

Sanwo-Olu said: “It gives me great pleasure to officially commission some of our school infrastructural projects, which will improve the learning and teaching environment in our public schools.

“We have aggressively embarked on the provision of blocks of classrooms, administrative offices, school furniture, laboratories, modern toilet facilities and security across the six Education Districts and Local Government councils.

“We have so far completed over 1, 097 projects covering 970 schools across the state.

“In the last two years, our government has ensured the prompt construction and rehabilitation of 322 dilapidated public schools, while 87,000 dual composite units of furniture were supplied to primary and secondary schools across the state.”

The governor said that his administration would continue to put in its best until all the promised infrastructure projects had been delivered to the beneficiary schools across the state.

Sanwo-Olu said that the state government’s investments in education had been yielding positive results with improvement in students’ performance in examinations, national and international competitions, as well as improved morals, etiquette and confidence in public speaking.

He said that inauguration of a new block of six classrooms and renovation of two-storey buildings comprising 12 classrooms, two staff rooms, one library, laboratory and ICT centre at Oregun Junior High School and others would go a a long way to improve learning processes. 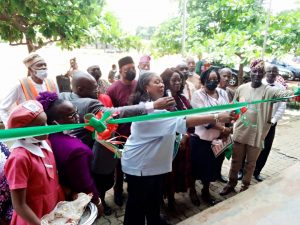 The governor said: “Education is still the most potent tool of empowerment and one of the most tested ways to close the gap between poverty and wealth.

“It provides individuals with the necessary knowledge and skills set to actualise their potential and maximise opportunities in life.

“The vital role of education in the growth and development of a megacity like ours has made it imperative for us to ensure that our children have access to quality education and an enabling environment for excellent learning,” he said.

According to him, the state is rapidly changing, and with globalisation and technological advancement, there is the urgent need to prepare the children for the future.

He said that the school projects would drive the “Education and Technology” pillar of his administration’s THEMES Agenda, as quality education remained imperative for the state to actualise its vision for greater Lagos.

In her address of welcome, the Commissioner For Education, Mrs Folashade Adefisayo,  said that the completion of the projects was an evidence of another promise delivered by the governor.

Adefisayo, represented by Mrs Okelola Oludara, Tutor-General, Permanent Secretary, Lagos, Education District six, noted that in less than two years of the governor’s administration, the state had met every one of its promises to a significant extent.

“These projects are evenly distributed across the LGAs and LCDAs in the state and there is hardly any school that was not touched by either a new school building , new classroom block, hostels, security structures, school fence, toilets, furniture, boreholes and so on.

”This reflects the amount of activity going on in upgrading infrastructure in our schools,” she said.

According to her, the governor’s focus has not been on infrastructure alone, as he has virtually touched all elements of the value chain of education including teachers recruitment and training.

Mr Hassan Akintoye, a representative of the Nigeria Union of Teachers, Lagos State Chapter, urged the governor not to relent in his efforts to revamp school infrastructure.

He said: “We have a man of vision in the affairs of this state and we can never have had it better.”

Akintoye urged the governor to make pronouncement on extension of teachers’ service years from 60 to 65.

A senior teacher at the Oregun Junior High School, Mr Yetunde Aina, who commended the governor for keeping the promise made to the school when he visited, said that the development of school infrastructure would aid learning.

The newsmen report that the representatives of the Parent-Teacher Association, traditional rulers, students and all stakeholders took turns to appreciate the governor for the development at both schools.