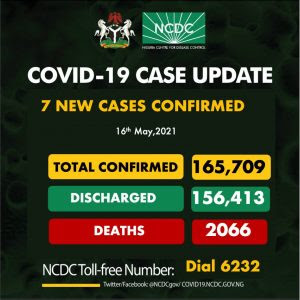 The Federal Government’s management of Covid-19 pandemic may have qualified for a standing ovation as the  Nigeria Centre for Disease Control (NCDC) Sunday night, recorded only seven new COVID-19 infection, the lowest in the country since January.

The NCDC which disclosed this on its official Twitter handle on Sunday also highlighted that the seven new cases recorded was down from the 41 cases registered on Saturday.

It disclosed that there were no new COVID-19 related death in the country on Sunday.

The public health agency stated that one person who was successfully treated had been discharged, which brought the total number of people who had recuperated from the disease to 156,413.

The agency stated that the new cases were recorded in two states with Niger 5 and Rivers 2, adding that 7,195 cases are still active in the country.

Meanwhile, the agency stressed that COVID-19 might cause severe complications in the elderly and people with underlying health conditions.

“We have to avoid non-essential outings, large gatherings and contact with anyone showing symptoms of COVID-19,” it said.

While urging Nigerians to get vaccinated, NCDC said that the COVID-19 vaccine protects people from severe illness and death from the virus.

In the meantime, Turkey emerged from its strictest nationwide shutdown on Monday that aimed at containing the Coronavirus, but weeknight and weekend curfews would still continue.

Many daytime restrictions were eased until June 1, residents had to stay at home from 9.00 p.m. to 5.00 a.m. on weekdays as well as the entire weekend.

There were exceptions such as walking to the closest market to buy groceries.

The 17-day lockdown was imposed after new daily infections crossed an all-time high of more than 60,000 in April, while the pace of vaccinations slowed.

The Interior Ministry said that shopping malls would be open on weekdays; restaurants and cafes were limited to only takeaway and delivery services.

Inter-city travel was allowed, except during curfew hours. Foreign tourists, however, faced no restrictions.

President Recep Tayyip Erdogan had said that the aim was to reduce new daily cases to below 5,000 and also revive the crucial tourism industry.

More than 10,500 new infections were reported in the last 24 hours in the country of 84million.

The total number of cases had crossed 5.1 million since last March, while the death toll was 44,760.

Nearly 26million have received their first vaccine, but only 10.9 million were fully vaccinated with their mandated second jab.

European ruling football body, UEFA, had moved the May 29 Champions League final from Istanbul to Porto because of the COVID-19 surge.

Also, Formula One had called off the Turkish Grand Prix set for June.