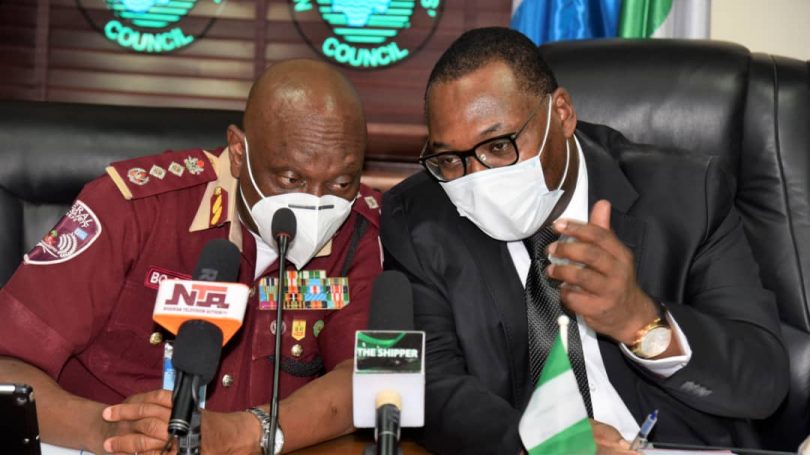 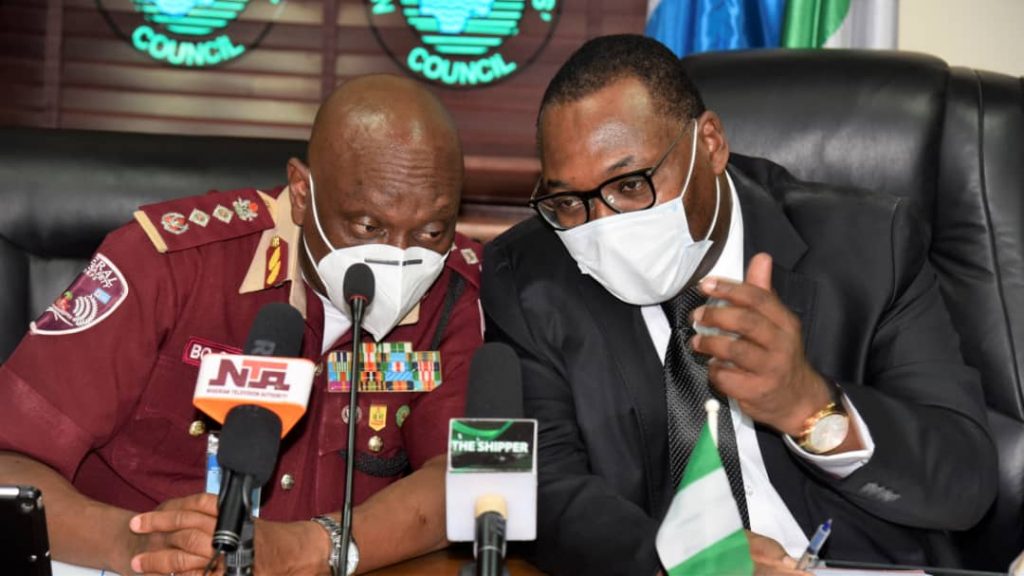 … Bello says Council yet to approve increase in terminal charges!

Nigerian Shippers Council and the Federal Road Safety Corps (FRSC) have entered into a collaboration which is aimed at significantly reducing carnage on roads, and seriously protect Nigerian lives and properties.

Some aspects of the Memorandum of Understanding (MoU), as agreed to at the Nigerian Shippers Council headquarters in Apapa, Lagos on Monday, would involve relevant exchange of data, between the NSC and FRSC, which would enable the Shippers Council nail errant or reckless drivers at the ports, before they hit the highways and become deadly. 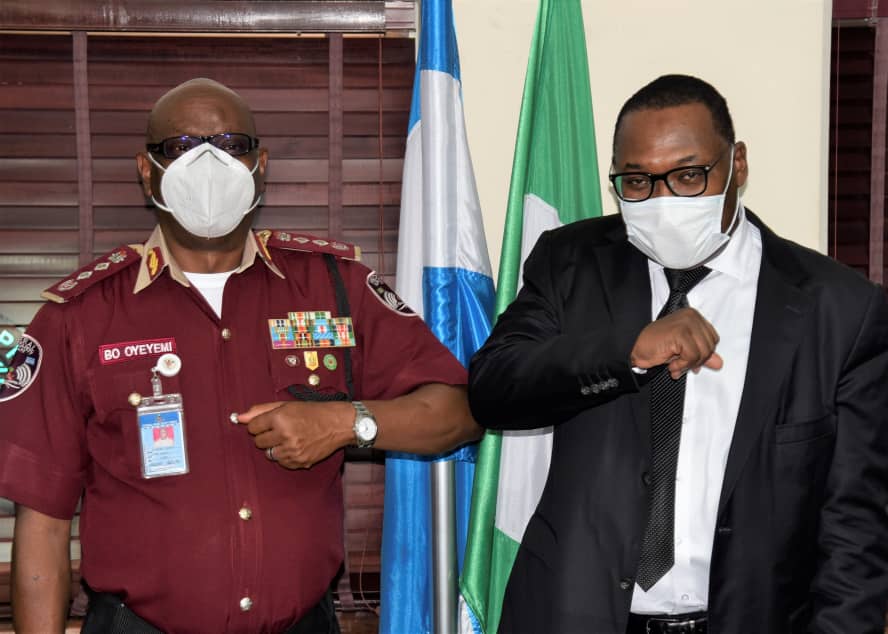 “We will support you fully on this. I mean, we are not doing you any favour by fully collaborating with you on this”, the FRSC Arrowhead, Dr Boboye Oyeyemi told NSC Executive Secretary, Barr. Hassan Bello, stressing that if the Shippers Council succeeded in its vision, the erroneous task of pursuing and deterring recklessness on the nation’s roads would have been heavily taken care of.

Consequently, the duo also agreed for another brainstorming session, which would accommodate a training workshop for truck owners, truck drivers, operators and other core relevant stakeholders, particularly, the NARTO, AMATO etc.

Broaching on reasons for constancy of avoidable carnage on the nation’s roads, the FRSC Corps Marshal, Dr. Oyeyemi said 90 per cent of trucks in the country are over 30 years; and called for an improvement on their maintenance and standardisation schemes.

Oyeyemi also noted that most of them lacked safety measures like good headlamps and necessary reflectors on their trunks.

He stressed the need for an intervention from the Federal Government to ensure truckers had fleet renewal as vehicles that had been on the road for 30-years should be scrapped. 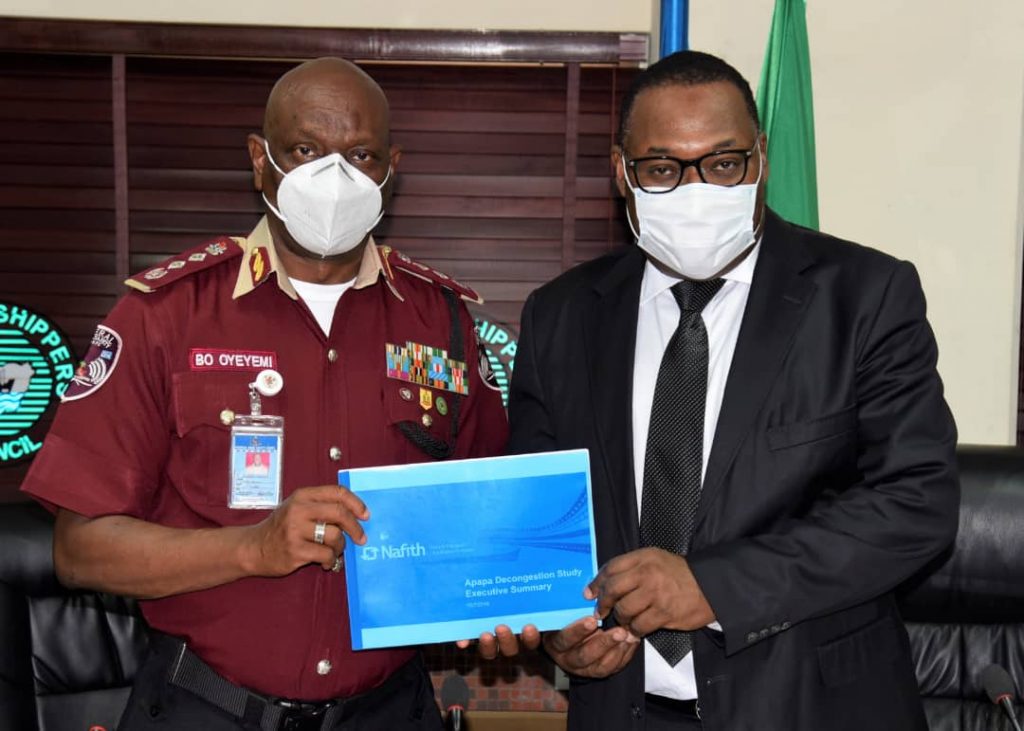 “Due to the age of the trucks, they frequently breakdown on the road, prolonging the days goods spend on the road before getting to its destination”, the Corps Marshal, Dr. Oyeyemi said, adding:

“While coming to this place, I went through the third mainland bridge and I saw trucks lining up on the bridge going toward Apapa and this is not good.

“Bridges are not meant to carry fixed trucks and when we have such scenario, we are reducing the lifespan of the bridges.

“Also, there is decay in the vehicle inspection system in the country, most of the trucks are not road worthy and this poses serious threat to road users.

“When these trucks break down, the goods will not get to its destination as scheduled and this affects the end users,” he also said.

Oyeyemi praised Shippers Council idea and the establishment of Vehicle Transit Area (VTA) project, which he described as ingenious; and called for more stakeholders engagement, to achieve the desired results; even as harped on need for engagement rather than by enforcement.

An elated NSC Chief Executive Officer, Barr. Hassan Bello highlighted that the meeting was to deliberate on the way forward, towards providing solutions to transport infrastructure deficit and other operational challenges to cargo movement.

Bello added that the corps marshal’s support of the council’s projects and activities had accelerated the achievements of major milestones in the development of critical infrastructure for trade facilitation.

According to him, the NSC conceptualised the development of the Truck Transit Park, now VTA, to provide convenient rest areas for truckers.

Bello said that other road users would also benefit from the project as it would ensure safety of lives and cargoes.

“NSC also has the mandate to ensure efficient and effective service delivery is enforced across the transport chain.

“The partnership between the NSC and the FRSC has recorded reasonable landmarks, especially in traffic management and safety of cargo in transit,” he said, adding that a Memorandum of Understanding (MoU) was signed with the FRSC to set standards for truck owners and drivers for effective implementation.

He said the MoU was also to generate a database on trucks, training, VTA implementation, public education and enlightenment, and others.

Nanle pointed out that the main objective of the project was to provide a place of rest for truck operators, and a measure of comfort for them to reduce fatigue and accidents on the roads.

In the meantime, the NSC Executive Secretary has stressed that the Shippers’ Council has not endorsed any increase in terminal charges.

Bello disclosed this at the sideline of an interactive session between the NSC, the Federal Road Safety Corp and haulage operators held in Lagos.

According to him, no one can increase or review charges without the approval of the council; adding: “So, if that is done, it is done in futility.”

He noted that they were in discussions with terminal operators and needed to be convinced that certain charges needed to be revised either up or down. 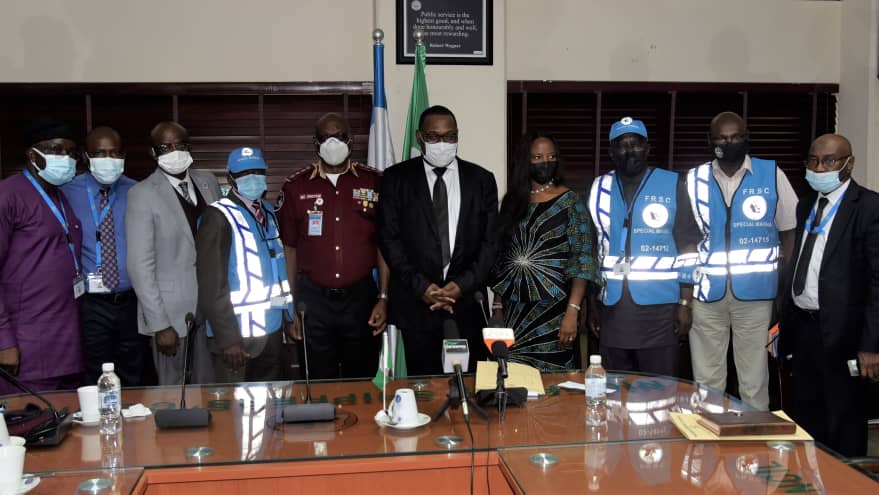 Dr. Boboye Oyeyemi and Barr. Hassan Bello, flanked by staff and road Stakeholders on Monday, after their collaborative meeting…

“We are concerned about this review because the alternate thing is efficiency and we know that some terminals are more efficient than others.

“Even shippers will not mind an increase as long as they get their cargo out of the terminal in a very good time and at reasonable cost,” Bello said.

Bello pointed out that they would like to see these terminals to be more efficient through digitisation.

“You can clear goods worth billions of dollars without going to the port and it will be efficient and transparent.

“This is the norm, it happens all over the world, and so Nigeria cannot be an exception,” he said.

Bello said that presently there was a form of competition with terminal operators as regards abiding to the specifications of the NSC such that a terminal that had low percentage in automation after three months came up.

He maintained that a digital process would bring about more cargo and which would boost profit, employment, infrastructure as well as investments.