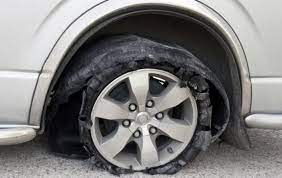 The Ogun Command of the Federal Road Safety Corps (FRSC) has advised motorists  to desist from fixing fairly-used tyres popularly called  ‘Tokunbo’ tyres to their vehicles to minimise crashes on the roads.

Mr Ahmed Umar, the State Sector Commander of FRSC, gave the advice in an interview with the newsmen on Wednesday in Ota, Ogun.

Umar was reacting to the accident that killed a driver and injured two others on the Lagos-Ibadan Expressway on Tuesday.

Newsmen report that a car with registration number KMR 508 XA, on Tuesday,had a tyre burst on the  Lagos-Ibadan Expressway,  which led to the death of the driver and two others injured.

The commander said that the crash could have been prevented if the driver had used good tyres and cautioned himself against speeding.

Umar warned motorists to shun the use of fairly-used tyres as they are just like a time bomb waiting for time to explode.

He added that motorists should also check the expiring date of any tyre they intend to buy to avoid tyre burst while their vehicles are on motion.

“The FRSC has observed that tyre burst, speeding and wrongful overtake of other vehicles have been the major causes of road crashes in the country.

“We urge motorists to refrain from speeding and the use of substandard tyres to save lives and property.”he said.