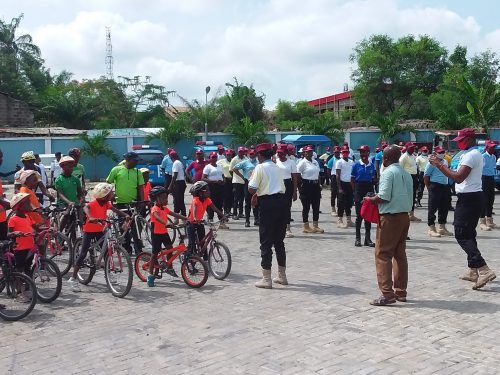 The Federal Road Safety Corps (FRSC) has called for the creation of dedicated lanes for bicycle riders to save lives.

The FRSC Sector Commander in Oyo State, Mrs Uche Chukwurah, made the call on Thursday during the commemoration of the World Bicycle Day 2021, in Ibadan with the theme “Save the Cyclists.”

The newsmen report that FRSC officials and some cyclists from Rising Star Cycling Academy rode bicycles from the command’s office, Eleye to NTA office in Agodi, and were received by NTA Zonal Director, Mrs Omolola Olorode.

“Bicycle being a non-motorised means of transportation, we are advocating a situation where there should be dedicated lanes for the cyclists.

“Agencies involved in road infrastructure, government, Non-Governmental Organisations (NGOs), stakeholders should consider the creation of dedicated lanes for the cyclists, so that they can ride on the road safely.

“There is the need to change the way our infrastructure are constructed to save the lives of cyclists,” she said.

Chukwurah said that cities across the world had separate cycling lanes for bikers.

She said commuters that used their bicycles regularly agreed that it saved time and the frustrating traffic jams.

Chukwurah further said the FRSC advocated for a non-motorized transportation system where Nigerians would abandon their cars and ride bicycles.

One of the riders, Dr Falade Babatunde, said cycling helped to achieve fitness.

In her remarks, the Zonal Director, NTA Ibadan, Mrs Omolola Olorode,said riding a bicycle had a lot of advantages, as it was easier to manoeuvre whenever there was danger.

“It is easier to manoeuvre when you see danger coming, you can easily divert,” she said.