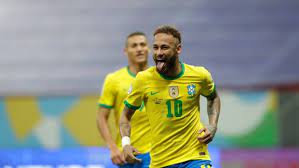 Neymar scored a goal and provided an assist as Brazil cruised to a 3-0 victory over Venezuela in their Copa America opening game in Brasilia on Sunday.

The hosts took the lead in the 23rd minute when Richarlison’s angled header from a Neymar corner-kick fell into the path of Marquinhos.

He then poked an improvised shot through the legs of Yohan Cumana.

But Brazil added a second goal in the 64th minute when Neymar converted from the penalty kick spot, after Cumana brought down Danilo.

Substitute Gabriel Barbosa made it 3-0 by chesting the ball into an unguarded net after Neymar rounded goalkeeper Joel Graterol and whipped in a cross from the left.

“We knew Venezuela would defend well and that made the game very difficult,” Marquinhos said.

“But we managed to get an early goal and that helped us because it took the pressure off and forced Venezuela to come out a little more.”

Brazil are vying for their second Copa America title in three years, having won the 2019 tournament in which they were also hosts.