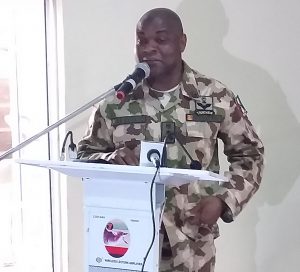 … As Police recover N1.3m from suspected kidnappers in Abuja***

The Nigerian Army has urged remnants of the Boko Haram terrorists to surrender and embrace peace.

The General Officer Commanding (GOC), 7 Division, Nigerian Army, Brig.-Gen. A.A. Eyitayo, made the call at a feast organised for journalists by the army on Sunday in Maiduguri.

Eyitayo, who is also the Commander Sector 1, Operation Hadin Kai, said the recent military onslaught against the insurgents dealt decisive blow on the terrorists leaving their remnants in disarray.

He noted that nobody including the military was happy over the bloodshed, hence, the need for the remnants of the insurgents to leverage on the amnesty and repent their nefarious ways.

This, he said, would avail them (insurgents) opportunity to enjoy rehabilitation and acquire skills to enable them to live a useful live in the society.

The GOC lauded the contributions of the media in the counter insurgency campaign and urged it to enlighten the insurgents to see the light and repent from their wasteful ventures.

“We are not here for bloodletting, nobody is happy that people are dying.

“Some of them (insurgents) are listening to the media so it is good for us to appeal to them through the media to shun violence, turn up to seek forgiveness and reconciliation,” Eyitayo said.

According to him, the feast with journalists was to show appreciation of the media reportage of military operations in the state.

“For the past three months since I assumed duty in Maiduguri in this capacity, there has never been any bad report.

“This is to appreciate the media for positive reportage,” he said.

In his remark, Mohammed Ibrahim, Secretary, Nigeria Union of Journalists (NUJ), Borno State Council, commended the GOC for carrying the media along and assured him of more support and cooperation.

Mohammed also lauded the military and other security agencies involved in the fight against insurgency for their sacrifices and urged them not to relent, adding that the people of the northeast region were solidly behind them.

In another development,  the Police Command in the Federal Capital Territory (FCT) on Sunday said they recovered N1.3 million from five suspected kidnappers arrested by operatives from the command in Abuja.

The Police Public Relations Officer (PPRO) in the FCT, ASP Mariam Yusuf, disclosed this in a statement in Abuja.

She said that the recovered money was paid as ransom to the suspects, adding that three mobile phones, charms three wristwatches and two caps were also recovered.

Yusuf said that the suspects, terrorising Tungan-maje, Bwari and Kwali-Kuje axis of Abuja were arrested by operatives from the Command’s Anti Kidnapping Squad during an intelligence led operation.

She said that the suspects confessed to belonging to a notorious syndicate of kidnappers involved in the recent abductions along Bwari-Byzahin, Kuje-Kwali axis and Niger State during police investigation.

Yusuf said that two suspects were also arrested over link to a kidnapping operatiion on Tunga-maje axis.

The PPRO said that the suspects would be arraigned in court upon conclusion of investigation.

Yusuf said that the conduct of Police Officers could also be reported to the Public Complaint Bureau (PCB) on 09022222352.