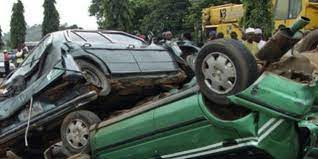 …. As LASEMA says ‘No loss of life in Marina fire outbreak’***

One person was confirmed dead and five others injured in Sunday’s auto crash at the Imo Emulu Village axis of the Abeokuta-Sagamu Expressway.

The Spokesman of Traffic Compliance and Enforcement Corps (TRACE), Mr Babatunde Akinbiyi, confirmed the incident to newsmen in Abeokuta.

Akinbiyi said the accident, which involved a green-colour Nissan Micra, with Reg. No. LSR 816 XA, and an unregistered Lexus car, occurred around 12.30 p.m.

He said it happened when the driver of the Lexus was attempting to overtake another vehicle but ended up in a collision with the Micra.

He said that seven people were involved in the accident and that six sustained varying degrees of injuries, while one person died on the spot.

“According to an eyewitness, the accident was caused by wrongful overtaking by the unregistered black Lexus,” Akinbiyi said.

He said that the injured persons were taken to Federal Medical Center and General Hospital, Ijaye, Abeokuta, by TRACE officials.

He said the remains of the deceased were deposited at a morgue at Idera Hospital, Sagamu by men of the Federal Road Safety Corps.

He, however, said the driver of the Lexus fled the scene of the accident.

The TRACE spokesman appealed to motorists to drive with caution and always put the lives of other road users into consideration.

In the meantime, the Lagos State Emergency Management Agency (LASEMA) said no life was lost in the fire outbreak which occurred at a three-story building in Marina, Lagos Island, on Sunday.

LASEMA Spokesman, Nosa Okunbor, told the newsmen that the fire started in one of the flats in the building.

“Earlier today, LASEMA and other stakeholders extinguished the fire that gutted the three-story Elephant House building at Marina.

“We effectively stopped it from extending to other property around it. Fortunately, no loss of life and no injuries were recorded.

“Situation report regarding the fire outbreak, upon arrival at the scene, showed that the above location was engulfed by fire.

“Further investigation at the incident scene revealed that the fire started from one of the flats at the third floor of the building,” he said.

He added that efforts to put off the fire proved abortive as the gas cylinder in one of the rooms exploded and spread the fire to adjoining flats in the building.

“The raging fire was eventually extinguished with the combined efforts of the community, LASEMA, Lagos State Fire Service (Lekki, Onikan Stations) and the Federal Fire Service,” he said.