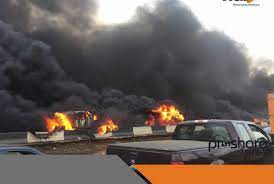 FRSC says a number of vehicles were destroyed in a tanker explosion at Ogere on the Lagos-Ibadan expressway on Tuesday.

FRSC Sector Commander in Ogun,Mr Ahmed Umar, who confirmed the incident to the newsmen, said that it occurred at about 6.20 a.m.

Umar explained that the explosion occurred in front of Romona trailer park at Ogere.

“The fire is serious; the number of vehicles involved cannot be ascertained yet.

“Ogun State Fire Service has arrived the scene, while FRSC operatives are on ground managing the traffic situation,’’ he said.

It was the fifth of such tragedies involving fuel tankers in the Lagos and Ogun State axis since the beginning of the year.

A similar fuel tanker-related fire was recorded on Jan. 7 on the Apapa-Oshodi Expressway.

On March 21, a fuel tanker was the cause of fire on Otedola Bridge, also on the Lagos-Ibadan Expressway in which many vehicles were burnt.

On March 25, a diesel-laden tanker went up in flames at the Ikotun area of Lagos, leading to the incineration of other vehicles and shops.

Last Thursday, on June 17, fire from the kitchen of a Chinese restaurant at the Ogun State Property Investments Corporation (OPIC) Plaza in Lagos trailed a leaking gas truck which was on motion in the area, resulting in a fire snowball which engulfed many other vehicles and properties.

Twenty-five cars were destroyed in the OPIC Plaza inferno, while 13 persons, mostly workers in the restaurant, sustained burn injuries.