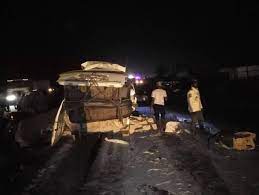 A pregnant woman and two other men have been confirmed dead in a multiple accident that happened around Danco axis on the Lagos-Ibadan highway.

Mr Babatunde Akinbiyi, the Spokesperson for  Traffic Compliance and Enforcement Corps (TRACE), confirmed the development to newsmen in Abeokuta.

Akinbiyi explained that the accident occurred around 4:30 a.m. on Thursday.

Akinbiyi said that the driver of the  Mazda bus carrying  ‘garri’  lost control due to speeding and rammed into an unknown run-away truck from the rear which led to multiple hits by other vehicles.

“Among the three casualties who died in the unfortunate crash are two men who are occupants of the Mazda bus loaded with ‘garri’, while the pregnant woman was in the  Mazda bus carrying tomatoes,’’ he said.

The TRACE spokesman stated that the deceased were evacuated by the officials of  the Federal Road Safety Corps (FRSC) to Idera Hospital’s private morgue, Sagamu.

He added that all the vehicles involved in the accident had been towed to the Police Divisional Command in Sagamu.

He commiserated with the families of the deceased.

Akinbiyi warned motorists to desist from speeding and always consider other road users.

In a related development, the Police Command in Kwara has confirmed that 10 members of the same family died after consuming a local herb mixture purported to be the cure for foot infection.

The Command Public Relations Officer, SP. Ajayi Okasanmi, made the confirmation in a statement on Wednesday Ilorin.

According to him, on June 22, at about 0700hrs, one Ibrahim Bonnie of Fulani camp Biogberu, via Gwanara, reported at the police station.

He said that one Okosi Musa and Worugura Junlin, came to his mother, Pennia Bonni of same Fulani camp, who was having a foot infection, with a local herbal mixture purported to be the cure for her ailment.

“After taking the local herbal mixture, the family members started dying one after the other, at the last count, 10 members including the infected mother, have died.

“The Commissioner of Police, CP Mohammed Lawal Bagega, has ordered a discreet investigation into the incident; the two suspects are already helping the police in their investigation.

“The commissioner of police advises sick members of the public to seek medical solution in recognised medical homes spread across the length and breadth of the state to avoid ugly incidents of this nature.

“Suspects will have their day in court at the conclusion of investigation,” he added.