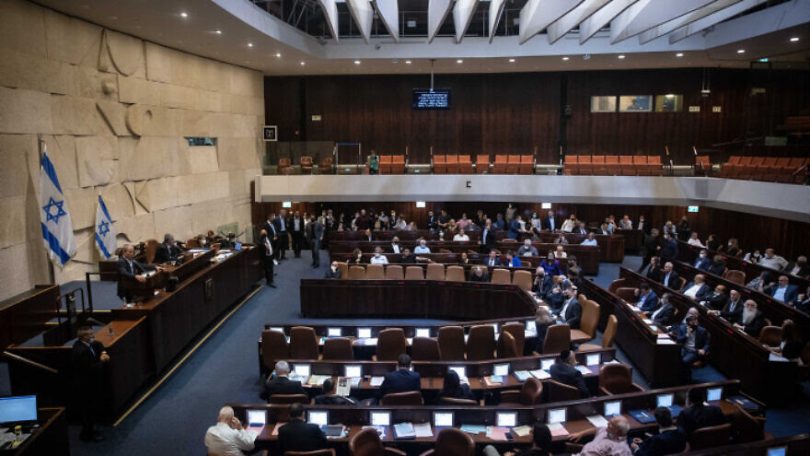 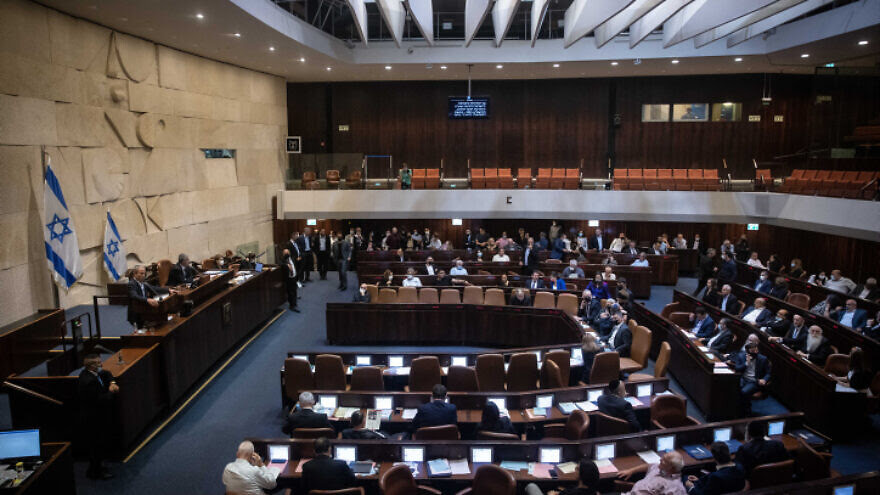 A plenum session in the Knesset on July 6, 2021. Photo by Yonatan Sindel/Flash90.

A bill seeking to extend a law regulating the status and residency of Palestinian spouses of Arab Israelis failed to pass a Knesset vote early Tuesday morning.

The “family reunification law,” first passed as a temporary order in 2003, blocks the automatic granting of citizenship or residency to Palestinians married to Israelis and has been extended by the Knesset every year since.

Minutes before the early-morning vote, which resulted in a 59:59 tie, the cabinet announced that the bill’s fate would in effect be a vote of confidence in the new government and that

if the bill fell, so would the government.

At 2:40 a.m., Interior Minister Ayelet Shaked presented a compromise agreement according to which the law would be extended for six months instead of a full year, with residency visas being issued to some 1,600 Palestinian families. The opposition rejected Shaked’s compromise, arguing that any alterations to the original temporary order needed to be presented two months ahead of a Knesset vote. This led to an uproar, and the opposition ultimately appealed to the Knesset legal counsel for an opinion.

Hours before the Knesset vote, MK Israel Katz tweeted: “While the Likud faction is weighing its vote on the matter of the citizenship bill, we were informed that the government has promised Ra’am it will gloss over the entry of another 1,800 Palestinian families. My position is to vote against the bill and the anti-Zionist deal between Shaked and Abbas. However, we will promote a Basic Law about entry to Israel that will completely prevent any Palestinian ‘right of return.’ ”

Speaking in the Knesset plenum, opposition leader Benjamin Netanyahu said, “Bennett and Shaked say they have formed a ‘Zionist government,’ but they aren’t capable of passing such a simple law because they’re dependent on anti-Zionist entities that oppose Israel being a Jewish, democratic state.”

“The responsible, correct thing to do is to pass a Basic Law on immigration, today, in a preliminary vote, and postpone extending the temporary order by two months, which will lead to a solution to the issue,” Netanyahu continued.

On Monday, Bennett addressed the controversy over the bill, saying, “The opposition is trying to wear us down through childish games. But there are things you don’t toy with. National security is a red line. The government needs control over who enters its borders and who receives citizenship. Bringing in thousands of Palestinians, granting them citizenship, and hurting national security for the sake of scoring political points—that’s simply not the right thing to do,” he said.

Shaked asked members of the opposition not to torpedo the bill.

“This law was originally passed for security reasons. They saw that over time, most of the terrorist attacks perpetrated by Arab Israelis were committed by people who came into the country under ‘family reunification,’ or by their children,” said Shaked.

“You must understand that if the law is shot down today, despite what some opposition leaders are choosing to lie to you about, over time, not even the interior minister will be able to stop a process of ongoing naturalization [of Palestinians], which is why the law is so important,” she added.

The Israel Security Agency (Shin Bet) warned on Monday that the government’s failure to pass the citizenship law was hurting national security.

This is an edited version of an article that first appeared in Israel Hayom.