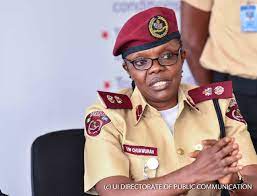 No fewer than 13 vehicles got damaged on Tuesday when a  tanker loaded with 11,000 litres of Premium Motor Spirit (PMS), also known as petrol, lost control in Ibadan.

The newsmen report that the accident happened at Challenge at 7:40 a.m.

Mrs Uche Chukwurah, the Federal Road Safety Corps Sector Commander in Oyo State, confirmed the accident in an interview with newsmen in Ibadan.

Chukwurah said that 10 of the damaged vehicles had been towed to the Felele Police Station, while the owner of the remaining three agreed to personally repair them.

The sector commander attributed the accident to brake failure.

She, however, said that no life was lost to it.

One of the victims, Mr Femi Olayiwola, said that the tanker driver might have been aware of his brake failure and was trying to manoeuvre, thereby damaging the vehicles.

Another victim, Mr Samuel Nathaniel, said that his children and wife were inside his car when the tanker hit it from behind.