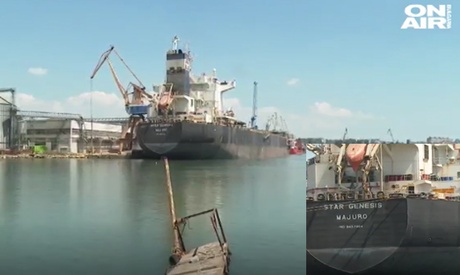 … As 4.3 Tons of Cocaine Seized In Costa Rica’s Second Biggest Drug Bust Ever***

Out of 20 Filipino crew, 12 had tested positive, and rushed to hospital for medical attention; but one could not be rescued, even as one is still hospitalized.

The rest have remain on board the ship which arrived Burgas on July 14, from the UAE via Suez.

In another development, the Drug Control Police (PCD) of Costa Rica on Saturday, 17th of July undertook the second biggest drug seizure ever in the country’s history.

A massive 4.3 tons consignment of Colombian cocaine was confiscated at the Port of Moin from a shipping container.

The PCD on initial inspection located a suspicious container onboard of Cala Palma ship arriving from the Caribbean port of Turbo in Colombia.

On further investigation of the suspicious container, 173 packages of cocaine concealed in between legal cargo of ceramic tiles were found.

The bust prompted authorities to continue with the inspection of other containers after which a total of 4329 packages were uncovered each containing approximately one kilo of cocaine.

After the seizure, Mr. Michael Soto the Security Minister on Sunday in his statement said, “We’re very close to 40 tons of marijuana and cocaine seizures in the country so far. We hope to surpass last year’s numbers.”

In recent years, Costa Rica has become the most frequently used Central American nation for the transit of Colombian drugs heading towards Europe. But the recent funding by the United States has led to increased success in the anti-narcotics operation in Costa Rica.

The seizure on Saturday marked the second-biggest drug bust by PCD, the first being seizure of 5 tons of cocaine from a shipping container at the port of Moin in February 2020.

These seizures add to the stringent measures being taken against drug trafficking gangs in countries like the series of raids at multiple locations across the country.

The success of these operations is also witnessed in the fact that just last month US military plane flew 40 tons of drugs combined for incineration due to the lack of this facility in Costa Rica.