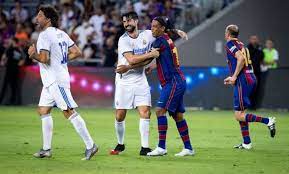 The match took place in front of 26,000 fans at Bloomfield Stadium in the coastal city of Tel Aviv-Yafo, in a format of 40 minutes per half.

FC Barcelona created their first chance in the 19th minute when Ronaldinho’s shot hit the post.

After eight minutes, the former Brazilian superstar scored from the penalty kick spot, after Antonio Nunez fouled Saviola in the box.

Real Madrid turned the score around within four minutes at the start of the second half with goals from Munitis and Perez.

Ruben de la Red scored the winning goal for the Blancos in the 70th minute.

Special guest of honour in the event was legendary goalkeeper Iker Casillas, who arrived in Israel on behalf of Real Madrid.

His presence was part of his role as representative and ambassador of the Spanish giants.