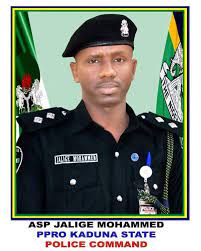 The Police Command in Kaduna State says it has arrested five suspects over alleged unlawful possession of firearms.

The command’s Public Relations Officer, ASP Mohammed Jalige, confirmed the arrest in a statement issued on Sunday in Kaduna.

Jalige said that their arrests followed a report received by the Divisional Police Officer (DPO) in Kubacha.

He said that the DPO had acted on the information received on July 24 that the suspects, armed with dangerous weapons, were engaged in unwholesome activities in Kenyi village in Kagarko Local Government Area of the state.

The police spokesman said that the suspects and some of the villagers had allegedly threatened the peaceful coexistence of the people over disputed piece of land.

He said that the situation had deteriorated to a boiling point, resulting in one of the warring parties threatening to kill their opponents with dangerous weapons.

“On receipt of the information, the DPO immediately mobilised to the scene, swiftly averted what would have been a tragedy and arrested the five suspects, all from Kenyi village.

Jalige added that the police operatives’ swift response not only forestalled “the foreseeable calamity but also restored normalcy in the community.”

He said that investigation had been unravelling the circumstances behind the fracas and the source of the illegal firearms.

The police spokesman quoted the Commissioner of Police in the state, Mr Umar Muri, as urging communities in the state to always embrace dialogue as an alternative dispute resolution rather than violence which might result in disastrous consequences.

“The commissioner also pledged to dispassionately investigate the incident and prosecute all those found culpable, to serve as deterrent to others,” Jalige said.

In the meantime, the Police Command in Delta on Saturday recovered a stolen SUV car and AK 47 riffle from suspected criminals in two separate operations in the state.

Bright said the SUV was recovered on July 23 by the police crack team attached to the Ebrumede Division near Warri.

“On July 23 at about 4:00 p.m, the DPO, Ebrumede Division, SP Bolarinwa Alabi, while on a stop and search duty with a crack team attached to the Division at one of the black spots close to DSC Roundabout, Warri, flagged down a vehicle for check but the driver refused to stop and rather zoomed off.

“The DPO quickly led the crack team and went after the vehicle.

“The occupants of the vehicle realising that the police were not relenting, abandoned the Toyota RAV4 Jeep with Lagos registration number EPE 949 FF and fled,” he said.

Bright said a master key was recovered from the vehicle.

He added that investigation later revealed that the Jeep was stolen from where it was parked on July 23.

Bright said that the police had launched a manhunt for the fleeing criminals.

He added that the DPO, Sapele Division, CSP Harrison Nwabuisi, led a crack team attached to the Division to recover AK47 from a suspect at Ugbeyiyi area of Sapele.

“On July 23 at about 2130hrs, the DPO Sapele Division received a distress call from someone in the 1jhUgbeyiyi area of Sapele and immediately led the crack team attached to the division to the area.

“The suspect, who wrapped an object in a caftan dress, on sighting the police took to his heels, but was chased into a nearby bush where he dropped the wrapped object and escaped.

“When the wrapped object was uncovered, one AK 47 rifle with one live ammunition was recovered.

“The rifle with breach number 06957 was without magazine but had already been corked. The ammunition was in the chamber,” Bright said.