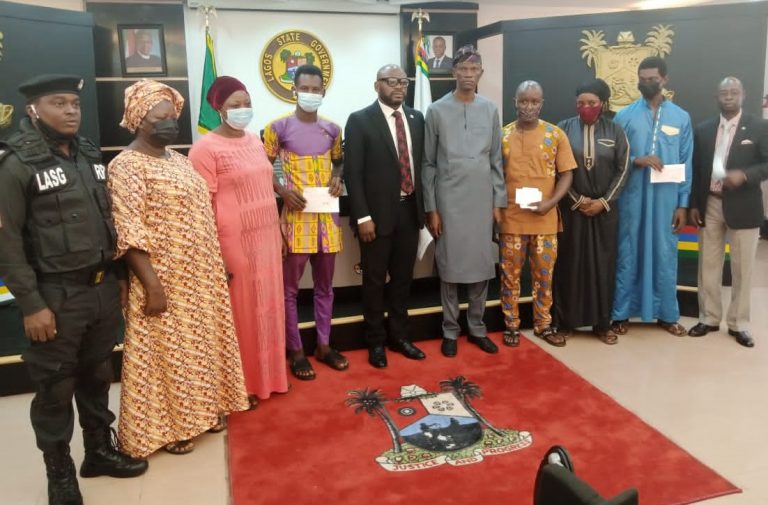 Chief of Staff to Gov. Sanwo-Olu of Lagos, Mr Tayo Ayinde, 5th from left; DCP Tunde Disu, a former RRS Commander, 1st from left and families of deceased policemen at the Government House, Alausa-Ikeja, during the presentation of cheques to families of three deceased policemen who died in the course of their duties in the state , on Wednesday July 28, 2021

Governor Babajide Sanwo-Olu of Lagos state has honoured three policemen who died in the course of their duties in the state with N30 million.

Sanwo-Olu, represented by his Chief of Staff, Mr Tayo Ayinde, presented three individual beneficiary cheques of N10 million each to the bereaved families at the Government House, Alausa-Ikeja.

This is contained in a statement issued on Wednesday by the Media Director, Rapid Respond Squad [RRS], Mr Taofiq Adebayo.

He pointed out that no amount of financial gift could make up for the lost lives and the gallantry of the fallen Patriots.

He appreciated the gallantry of the deceased operatives, reassuring the families and Lagos residents of the government’s commitment to always work for the good and well-being of the masses.

A son of one of the deceased, Mr Olufemi Odeniyi, who spoke on behalf of the three families, expressed appreciation to Governor Sanwo-Olu for the money, describing it as a lifeline.

In a related development, the Peoples Democratic Party (PDP) in Lagos State on Wednesday said that the death of its Secretary, Prince Muiz Shodipe, might slow down the re-engineering of the party in the state.

Lagos PDP Publicity Secretary, Taofik Gani, who noted that Shodipe died in the early hours of Wednesday in a statement, said that the sudden loss of Shodipe to the cold hands of death was one death too much for the party.

Gani said: “The party fears that the death of the dogged Secretary at this time is a big blow which may slow the reengineering of the Party in the state.

“It, however, submits to the will of God just as it prays for the soul of the departed to enjoy the bosom of the Lord.”

He prayed for the family to have the fortitude to bear the monumental loss.

The spokesman said that the party had directed all her flags all over the state to be flown at half mast and special prayers be held for the departed at all her meetings statewide.