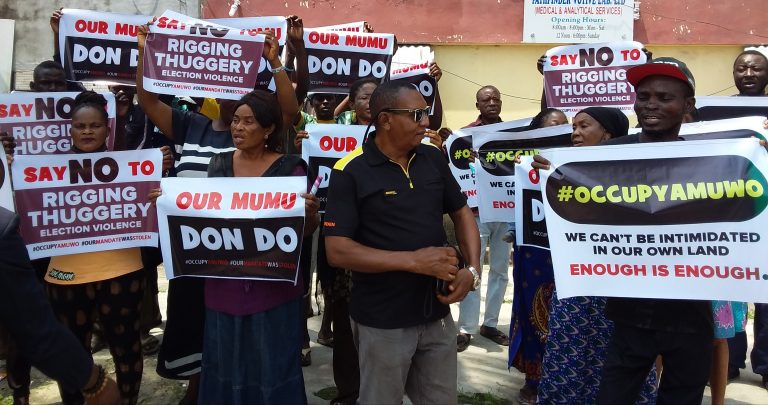 A group, Concerned Residents of Amuwo Odofin, on Wednesday in Lagos staged a peaceful protest to register their dissatisfaction with the conduct of the Saturday local government elections in the area.

The group called on the Lagos State Independent Electoral Commission (LASIEC) to cancel the exercise and order a rerun, citing electoral malpractices.

The newsmen recall that LASIEC on Tuesday presented Certificates of Return to the 57 council chairmen elected in the July 24 polls.

LASIEC had described the election  as ‘pretty good’, though with pockets of hitches, noting that the exercise was peaceful and without any major uprising and rioting.

But the group, which held a peaceful protest  in Festac Town, Amuwo Odofin Local Government, demanded that the election should be cancelled.

It alleged that the election was a far cry from public expectations from LASIEC.

It further alleged that the exercise was plagued by electoral malpractices.

One of the conveners of the group, Mr Mayowa Ademola, expressed concern over what he referred to as “violent elections” in the area.

“It’s getting too much. It’s not right that we can’t joyfully have an election.

“Many people didn’t come out to vote because of  fear of what may happen,” he said.

Ademola opined that LASIEC would disenfranchise many people if the election was not cancelled.

A resident, Mr Fidelis Mamuyovwi, claimed that he was forcefully carried out of the council because he insisted that the correct results be announced.

“After the election, we went to the council but we were not allowed to enter the collation centre,” he said.

Mamuyovwi, who was also a PDP agent, said that a voter, who tracked his votes to the collation centre, raised alarm when figures that were announced were different from what was recorded at the polling unit.

Another protester, Mrs. Anthonia Monday, said she was part of a group of residents who protested at the council secretariat when some party agents were denied entry into the collation centre.

“The results were collated and announced at the polling units but the figures changed at the final collation point,” she claimed.

She urged LASIEC to cancel the July 24 elections and conduct a rerun that would be free and fair.

In the meantime, he Governor’s Advisory Council (GAC), Lagos State All Progressives Congress (APC), says the party will adopt a consensus arrangement for its ward executives.

Addressing journalists on behalf of the GAC members after the council meeting held at Lagos House, Marina, on Wednesday, Prince Tajudeen Olusi said that the ward congress was scheduled for Saturday, July 31, to elect ward executives.

The GAC, the highest decision making body of Lagos State APC, comprised prominent leaders of the party across the state.

Olusi said that party officers at all levels had been directed to engage in dialogue that would lead to meaningful reconciliation of those in disagreements.

This is to accommodate members who are willing to serve the party.

He said that the  GAC had directed all leaders and party officers to dialogue in the spirit of brotherhood to decide those who were going to lead the party after congresses.

“We deliberated on the incoming state congresses of our party and later the national convention.

“We have resolved and directed officers of our party at all levels to engage in dialogue that would lead to meaningful reconciliation of aggrieved members within the party.

“This is in order to ensure that all opinions are accommodated and all members who are willing to serve the party are given positions in the various executive bodies at ward, local and state levels.

“This, we have done and we are sure all officers of our party will follow the consensus decision that we have taken, so as to ensure that all willing members of the party who want to serve are considered.

“We have also directed that they should hold stakeholder meetings at all local government levels.

“This is where leaders and officers will sit down, talk together in the spirit of brotherhood and decide who will lead the party after the congresses,” Olusi said.

GAC also appreciated the people of Lagos for reposing confidence in the APC at the last local government elections.

Balogun said that APC would hold stakeholders meetings in all the local governments in the state on Thursday.

“Next Saturday, we are having a ward congress which will lead to the formation of our party officials. We are having our stakeholders meeting tomorrow (Thursday) and there, we will decide on what to do.

“We are engaging a lot of stakeholders and we are going to do the ward congress on consensus.

“Consensus arrangement has been adopted by the party.

“We will be doing that for Lagos State. We have decided to adopt the consensus arrangements, which is constitutional. It is part of the provision of our party,” he said.

Commenting on the outcome of last Saturday’s local government elections in Lagos State, Balogun said that APC won the election landslide with about 584,000 votes across the state.

He said that the main opposition party, the People’s Democratic Party (PDP), scored about 81,000 votes.

“We had a peaceful, free, fair and credible election, which was conducted very well by  Lagos State Independent  Electoral Commission (LASIEC).

“We have to be thankful to the residents and voters in Lagos State, who had shown so much confidence and trust in APC. We will continue to deliver the dividend of democracy,” the chairman said.