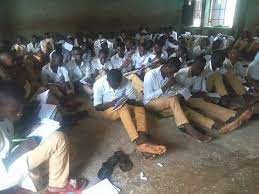 Oil rich Bayelsa State may be so broke and it’s public infrastructure so down, that more of its students now write their examinations on bare floor.

Checks confirmed that Students of Gbaranowei Grammar School, Okolobiri, near Yenagoa, have presently joined the group of those doing so, even as Community watchers expressed deep concern over the deplorable condition of the school and lack of basic infrastructure.

A Source said it was the school has produced great leaders of today, including the Minister of Transportation, Rotimi Amaechi.

The students were seen writing their promotion examinations on bare floor, when the Federated Correspondents Chapel of the Nigeria Union of Journalists embarked on a tour of the school.

It is noteworthy that the mixed school, established in 1973 with boarding facilities, has produced prominent personalities, including the Minister of Transportation, Rotimi Amaechi, the Bayelsa Commissioner for Information, Orientation and Strategy, Ayibaina Duba, among others.

However, the school buildings have suffered serious dilapidation and looked neglected with the ceilings pulled off.

The classrooms lacked basic furniture, including writing tables and chairs, hence the students had to sit on the bare floor to write their examinations.

It was learnt that the school furniture was destroyed during the 2012 flooding in the area.

The few available tables and chairs were provided by parents, under the auspices of the Parents/Teachers Association.

In Senior Secondary School Class 2B, there were barely 11 seats for the 79 students.

The staff room also looked decrepit with eight tables and eight chairs, leaving the teachers to stand or rest on the walls and dilapidated windows.

Reacting to the development, Duba said that government was aware of the situation and that something was being done to address the situation.

He said the Ministry of Education had carried out a NEEDS assessment to determine the particular challenges facing each school in the state.

He listed the most prevalent challenges to include inadequate school furniture, the lack of teachers, basic amenities and poor buildings.

He said the state government purchased and distributed seats to some public schools and expressed dismay that Gbaranowei Grammar School did not benefit.