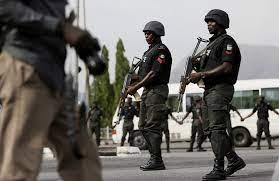 … As NAPTIP reunites 22 Human Traffick survivors with families in Sokoto***

The Zamfara Police command, on Thursday said that it had rescued five of the 73 abducted students of the Government Day Secondary School, Kaya, in Maradun Local Government Area.

The Police Public Relations Officer (PPRO) of the Command, SP Muhammed Shehu, announced the development in a statement in Gusau on Thursday.

“The Police Command wishes to announce the unconditional and safe rescue of five out of the 73 abducted students of Government Day Secondary School, Kaya.

“It could be recalled that, upon the abduction of 73 Male and Female students, the state police command, in collaboration with other security agencies with the support of the state government, swung into action by deploying a joint search and rescue team to Kaya and its environs to effectively rescue the abducted students and reunite them with their families.

“The victims were medically checked at the hospital, debriefed by the police and reunited with their families,” Shehu said.

Shehu said that CP Ayuba Elkana has assured parents of sustained effort to rescue the remaining students hale and hearty.

In the meantime,  the National Agency for the Prohibition of Traffic in Persons and other Related Matters (NAPTIP) has reunited no fewer than 22 survivors of Human Trafficking with their families in Sokoto State.

Mr Abubakar Bashiru, NAPTIP’s Zonal Commander, Sokoto Command, disclosed this while briefing newsmen at the reunion in Sokoto on Thursday.

He said the survivours were intercepted at Niger Republic and handed over to NAPTIP by the Nigerian Immigration Service on Aug. 30.

“We have concluded investigation and counseling on the survivors and today they are to be reunited with their families through their various community leaders resident in Sokoto.

“However, from our investigation we found out that some of the survivors were encouraged by their family members to embark on such a dangerous journey,” he said.

Basharu therefore urged parents and guardiants to ensure proper monitoring and counselling of their children in order not to be easily lured into embarking on such dangerous journey.

He assured that the agency would continue to track activities of the perpetrators with the support of the survivors and ensure they were prosecuted for the act.

“We are not really happy that our children are involved in human trafficking.

“Yorubas are not known for such illegal activities, because we instill good values in our children which encourage other tribes in the country to want to emulate us.

“So, basically as Yoruba leaders, we feel very bad about the current development and I want to assure you that proper measures will be taken to address the situation,” he said.