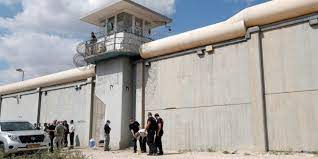 …Hundreds of Gilboa prisoners to be transferred to other prisons***

The Israeli military, along with the country’s Shin Bet domestic intelligence agency and police, are now searching for the escapees, it said.

The prisoners escaped through a tunnel from the Gilboa maximum security prison in the north of the country, Israeli media reported, citing the prison service.

According to media reports, the escapees dug a hole to connect with the tunnel, which was built by people outside the prison.

Several of the men are convicted of carrying out attacks on Israelis, according to the media.

Hundreds of Gilboa prisoners are now to be transferred to other prisons as a precaution against further escapes.

The Gaza-based militant Palestinian organisation Islamic Jihad called the escape a “heroic act,” saying that it dealt a “severe blow” to Israel’s government and military.