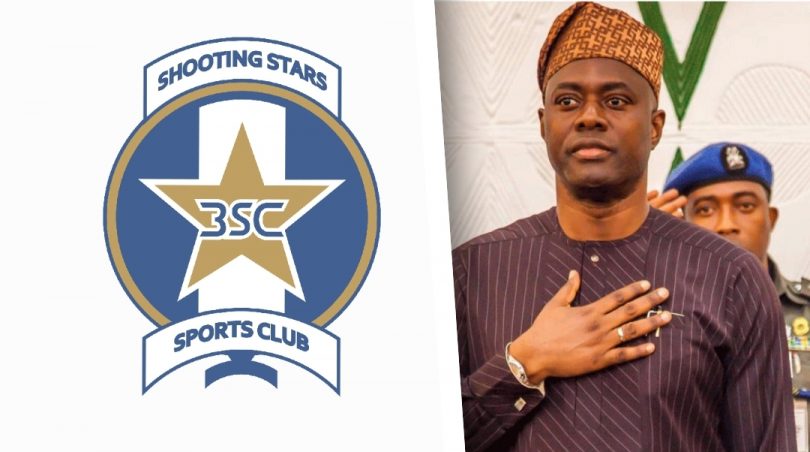 … As Owo blow considers 3SC’s promotion, a return from ‘wilderness to wonderland’***

Encomiums from some notable sports groups in Oyo State have continued to trail Shooting Stars Sports Club (3SC) on its promotion to the Nigeria Professional Football League(NPFL).

The groups showered the encomiums on the Oluyole Warriors in separate statements made available to newsmen on Sunday, in Ibadan.

The 3SC, on Saturday regained promotion to the elite division of the Nigerian league, after securing seven points in the Nigeria National League (NNL) Super 8 playoffs in Enugu.

3SC was relegated to the lower level (NNL) in 2017 and had since struggled to return to the NPFL, until last Saturday when it dazed Ekiti United FC by 6-0 in the Group B Conference, defeated Bendel Insurance 3-0 and drew 1-1 with Remo Stars.

In its statement, the Oyo State Chapter of Sports Writers Association of Nigeria (SWAN) felicitated the players, coaches, officials and the management of 3SC on their well deserved return to the NPFL.

The statement jointly signed by its Chairman, Niyi Alebiosu and Secretary, Adewale Tijani, said the promotion of 3SC was not a fluke, as it applauded the players and ingenuity of Coach Edith Agoye for the achievement.

“It’s as a result of the determination of the players who recorded an unprecedented nine game winning streak and a year’s unbeaten run spanning 2020 to 2021,” it said.

SWAN also commended the team’s management, led by the Alhaji Rasheed Balogun and ex-international, Dimeji Lawal, whose untiring efforts bolstered the morale of the team.

It also attributed the success of the Oluyole Warriors to the massive moral and financial support they enjoyed from Gov. Seyi Makinde, who, SWAN said was worthy of praise for his exemplary and benevolent leadership which had positively touched all aspects of lives of Oyo state residents.

“To be frank, this promotion being celebrated wouldn’t have been possible without the massive motivation and total support from the governor, who has been their number one fan in the past two years.

“Aside funding the team adequately, the governor also remodelled the home ground of 3SC, Lekan Salami stadium, to ensure fans and lovers of the round leather game enjoyed good football.

“We thank the governor for putting smiles on the faces of youths, athletes and sports lovers in the state, through his laudable development of sports, as well as motivation of officials,” SWAN said.

The association urged government and other stakeholders not to relent, but see the promotion as the restoration of the club’s lost glory.

“We enjoin the management of 3SC to see the promotion to the NPFL as a way to return the club to its former glorious position as one of the best teams in Africa,” it added.

The Crown Football Club of Ogbomoso also congratulated the governor on the promotion of 3SC to the NPFL.

The club, in a statement signed by its Acting General Manager, Kunle Oyeleye, said the governor had proved that he could accomplish any task in this world.

“Shooting Stars-cum the entire South-western Nigeria had longed for a space in the country’s highest football category for quite sometime. Until now, when the sports-loving governor came with his Midas touch, the dream had been elusive.

“It is crystal clear that the governor is the impetus and motivation for this wonderful achievement as he has done in other sectors in Oyo State. We are proud of the governor,” it said.

It lauded Alhaji Rasheed Balogun, 3SC General Manager, for bringing to bear his expertise as a long-standing football administrator on the Ibadan soccer outfit.

“The 3SC team has shown their class in the comity of football teams in Nigeria and their Ogbomoso brothers, the Ajilete Warriors.

“We are proud and we stand shoulder high for their unrelenting effort at bringing the honour this time when both teams are receiving deserving attention from the governor,” the statement said.

Similarly, the Oyo state chapter of the Nigeria Football Coaches Association (NFCA) also congratulated 3SC on its well deserved promotion to the NPFL.

The association, in a statement signed by its Chairman, Festus Adegoju, rejoiced with Agoye, their member and 3SC’s coach, for climbing to the premiership rung of the Nigerian league.

It appreciated the governor for his unflinching support to the team, saying that there was, however, more work to be done by all stakeholders.

“We earnestly pray that he succeeds while the team gets there. We appreciate the team’s efforts, technical crew, backroom staff, the Football Association and the state governor.

“I also appreciate my colleagues who unendingly torture Agoye’s tactical thinking with coaching advise. Here we are, but more work to do,” the NFCA statement said.

In the meantime, Ex-Green Eagles player, Felix Owolabi, has described the promotion of Shooting Stars Sports Club (3SC) to the Nigeria Professional Football League (NPFL) as a return from ”the wilderness experience to wonderland”.t

Owolabi, who disclosed this at a news conference on Sunday, in Ibadan, noted that the club had just returned to where it rightly belonged.

Owolabi, who expressed joy at the promotion, said it was the will of God that 3SC would leave the wilderness experience, for the wonderland.

“It is an overwhelming victory. It is not a fluke for one to have risen to score six good goals. This shows a lot of zeal, determination and dedication on the part of the players.

“I feel highly elated. I am happy that wherever you go today, everybody is shouting Up Shooting. This is a reflection of the people’s magnanimity to the club,” he said.

The ex-international commended the players for putting smiles on the faces of their teeming fans and supporters all over the country, while calling on the club owner, the Oyo State Government, to ensure it funded it adequately, so as to sustain its winning streak in the league.

“Funding a football club today is capital intensive, so the state government must fund it very well, to sustain the club in the league,” he said.

Owolabi further implored stakeholders to ensure that a greater percentage of the players who secured the promotion and were dedicated to the club, were retained.

“This is not a time to say we need premier players to play the premier league, like we do hear often, at the end of eras like this.

“They should parade players who give their best and all-in-all anytime they are called unto the field of play. They should be extremely careful in their selection.

“The more you bring new players, the more the challenges the coaches face. Now that there is a team on ground, they should build on this foundation,” he said.

The ex-3SC player also implored the club’s teeming fans and supporters, to work as a unit, toward sustaining the club’s successes.

On the Super Eagles, Owolabi observed that the team was crawling and but moving with results, saying there should be less talk about Gernot Rohr, the Technical Adviser.

“Whether we like it or not, the ultimate is that we must qualify and this is the target they have been given. So, let us see how he does it to get the result,” he said.

Owolabi said the Super Eagles technical crew was doing their best, especially given that a greater percentage of the players were foreign-based.

He said that Nigerians needed to be patient with them, as their style of play might be different from what was obtained in Nigeria.

Owolabi, an ex-Nigerian international with the former Green Eagles, and a long standing 3SC player, holds a doctorate degree in Physical Education.