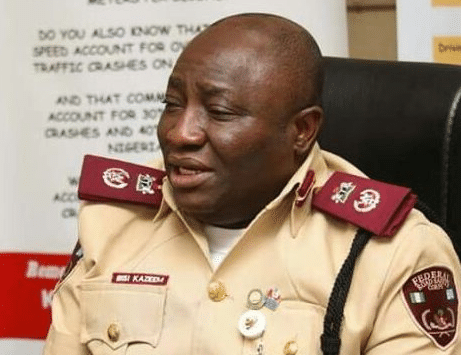 The Federal Road Safety Corps (FRSC), says it is set to inaugurate“Operation Show of Readiness’’ as part of efforts to reduce road traffic accidents during the 2021 ember months.

Mr Bisi Kazeem, the Corps Public Education Officer (CPEO) told the newsmen on Tuesday that the operation would involve massive sensitisation campaign ahead of the corps’ annual “Special Patrol’’.

Kazeem said that operation show of readiness followed the review of the FRSC’s 2020 ember months’ performance and the need to break new grounds.

He said “to achieve this, we have deployed public enlightenment teams to motor parks, Churches, Mosques, town hall meetings and we will use motorcade for awareness where possible.

“From the 2020 review, the corps realised that night travels are prevalent during this time (ember months) with overwhelming negative results.

“Speeding is also known to be responsible for over 60 per cent of crashes.

“As such, the corps will deploy energy to discourage people from indulging in these deadly road use behaviour (night travels and speeding).’’

Kazeem said that the corps would use Special Marshals, first responders, celebrities, traditional rulers and involve road safety clubs for the special operation in view of the COVID-19 travel advisory.

“Operation zero tolerance to road traffic crash carried out annually by the FRSC is also part of strategies to reduce crashes aside the maiden operation show of readiness,’’ he said

Kazeem said during the exercise, visual acuity test/screening for drivers would be conducted as well as free safety checks on vehicles.

In the meantime,  the Federal Road Safety Corps (FRSC), Kaduna State Sector Command, said it prosecuted 1,108 traffic offenders in the month of August, 2021.

The Sector Commander, Mr Hafiz Mohammed told the newsmen on Tuesday in Kaduna that those prosecuted were arrested during a special intervention patrol.

He explained that the special intervention patrol was to stem traffic law infractions on highways, and the attendant fatalities and life-threatening injuries.

According to him, the 1,108 offenders were prosecuted for committing 1, 220 offences.

“The most prevalent offences within this period were seat belt and number plate violations, expired tyres, speed limit device violation, riding motorcycle without helmet, overloading and drivers license violation, among others,” Mohammed said.

The sector commander said the special intervention patrol was part of strategies put in place by the command to end road crashes within the state.

Mohammed said other areas of focus during the special patrols, that will be held periodically, include; rickety vehicles, shattered windscreen and driving with one headlight or nonfunctional break lights because of the rainy season.

He said that the command would improve on road safety awareness and enforcement of traffic rules and regulations to reduce road crashes to the barest minimum.

The sector commander cautioned motorists to always comply with traffic rules and regulations, stressing that any violation would not be tolerated.

“FRSC is committed to achieving its set objectives in line with the 2021, Corporate Strategic Goals of the Corps,” Mohammed said.