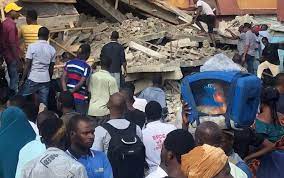 The Police Command in Jigawa on Monday confirmed death of three teenagers to building collapse in Ringim Local Government Area of the state.

The command’s Public Relations Officer, ASP Lawan Shiisu, confirmed the death in a statement he issued in Dutse on Monday.

Shiisu said that the building collapsed on Thursday at Yakasawa Kwari Village, Ringim, and was reported to the police by the father of the deceased, Malam Garba Lawan.

He said that with the aid of the police and some locals, the deceased – Naima Garba, Umar Garba and Sale Garba, aged 14, 12 and eight, were removed from the debris and rushed to the General Hospital,  Ringim, for medical attention.

“On Sept. 09, at 8:45 a.m., one Garba Lawal of Yakasawa Kwari Village of Ringim LGA reported that on the same date, at 5:30 a.m.,  when he woke up to observe morning prayer, he noticed that one of the rooms of his house had collapsed while his children were sleeping in it.

“He immediately checked on them and found that all of them were beneath the debris,” Shiisu said.

The spokesman said that the teenagers were later confirmed dead by a doctor at the general  hospital.

According to him, the Commissioner of Police in the state, Mr Aliyu Sale, has called on people in the state to ensure that their buildings are in good condition, particularly during rainy season, in order to avoid collapse.

In the meantime, Four residents of the Federal Capital Territory (FCT) have lost their lives to floods.

The FCT Emergency Management Agency (FEMA) said it established this in the course of its rescue operations which lasted between Sept.12 and Sept. 13.

“Following long hours of heavy rainfall on Sunday, Sept. 12, Trademoore, Light Gold and Wisdom Estates, as well as Lugbe community were heavily flooded, resulting in the loss of lives “ FEMA Director-General, Alhaji Abbas Idriss, said in a statement on Monday in Abuja.

“FEMA has established, in the course of rescue operations which began from 9 p.m. of Sept. 12 up to Sept. 13, that four persons lost their lives to the floods and the recovered bodies have been taken away by family members for burial.

“Also, over 26 vehicles, including an articulated towing van, were swept away by the flood, besides a tarred road in Trademoore Estate which was completely washed away as a result of the strength of the flood water,“ he said.

The FEMA boss said a total of166 houses were affected,  noting that the agency was still estimating the losses suffered by residents as a result of the floods.

Idriss conveyed the deepest sympathies of the FCT Minister, Malam Muhammed Bello, to the residents and families of those who were killed.

He appealed to FCT residents, especially developers, to desist from violating the approved building codes.

“We are also appealing to them to stop erecting retention walls to protect storm water from flowing. By doing so they are causing more havoc to the community,“ he said.

Idriss advised that as the FCT enters the final phase of the rainy season, in which the rain is at its peak, residents should avoid dumping refuse in drainages.

He also advised them to clear all surrounding drainages and other blockages that obstruct the free flow of water.

The D-G enjoined residents to avoid driving or walking through flood waters.

He also called on those living along river banks to relocate to higher ground when threatened by floods.