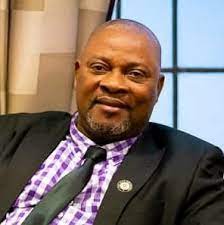 The Special Adviser to the Governor on Transportation and Chairman, Traffic Management Enforcement Team, Oluwatoyin Fayinka

Following strong suspicion that the Traffic Management Enforcement Team charged with the responsibility of curbing gridlock at Apapa ports and ports’ environs had compromised its position on enforcement, the Lagos State Government has convened a meeting with the Truckers Unions, to address allegations and counter allegations making the rounds.

Speaking at the stakeholder’s meeting at Alausa, the Special Adviser to the Governor on Transportation and Chairman, Traffic Management Enforcement Team, Oluwatoyin Fayinka emphatically stated that the State Government was not party to the extortion ongoing along the port access roads.

Fayinka also declared all duplicate enforcement groups as usurpers, reiterating that his Team remains in charge of all enforcements through the Lagos State Traffic Management Authority (LASTMA) with the help of the Nigerian Police Force.

He equally stressed that all officials and individuals beating up drivers and carrying out illegal sanctions are not backed by the State Government.

While urging Truckers to speak in one voice about their woes which the gathering was poised to address, Fayinka opined that the fact finding gathering will further expose parties responsible for the current state of things at Apapa, adding that physical and graphic evidences will go a long way to legitimize their petitions and feedbacks.

Responding to the questions and comments from the stakeholders, the transport Special Adviser declared that the State Government has approved a single ticketing system worth of 800 naira which will cater to waste management at the parks and also provide Tax certificates for truckers, to cut down the frequent levy placed on trucks at each Local Government by the transport unions.

In his contribution, the Nigerian Port Authority (NPA) Coordinator, Mr. Nnorom Emmanuel stated that the State Government had a role to play in sealing the loopholes that have been created since the E-call up system was initiated, adding that most of the bonded terminals had been converted to holding bays temporarily, hence the need for prompt clearance of broken down vehicles on the access roads to minimize congestion and investigation of fraudulent activities around the corridor.

Affirming the Special Adviser’s words, Chief Superintendent of Police, Adebowale Ganiu stated that the personnel attached to the Special Adviser’s enforcement team are stationed to back up LASTMA along the port Access roads, assuring that more Officers will be deployed to remove thugs perpetuating nefarious acts.

In response to the request made by the Special Adviser to the stakeholders to table concerns on the situation at hand, Mr. Rilwan Bello a member of AMATO requested for lands to be allocated for trucks to offload empty containers and to serve as holding bays while waiting for call up, he also requested for the removal of area boys and miscreants.

Emmanuel Essien, a stakeholder and a Trucker urged the Enforcement Committee to implement stronger enforcement measures on the trucks without valid TDO’s and ETO tickets barring other truckers with business to do in the ports without physically abusing and victimizing offenders.

The Vice President COMTUA advised the NPA and Shippers Council to work together, adding that the ETO call up system needs to be improved to close up the loopholes that have been created by defiant truckers to eliminate delay in port operations which will invariably improve the traffic situation leading around the ports.

The Organizing Secretary, COMTUA, Adeyinka Aroye complained that the rejection of the Apapa/Iganmu Local Government proposal by some truckers to ensure seamless movement within the axis had led to 7 extra extortion points within the Local Government area blaming it on the complicit act of Law Enforcement Agencies.

He requested for regular deployment of officers of the agencies stationed along the corridor, reiterating that enforcement should not be sectional.

Expatiating on this, the Assistant Director, Public Affairs, Bolanle Ogunlola (Mrs.) that the Stakeholders were subsequently assured that their various requests will be treated with dispatch, even as Hon. Sola Giwa, a member of the Traffic Management Enforcement Team urged the truckers to play their part in the quest for return of sanity to Apapa and its environs which according to him, will be of great benefit to their business.