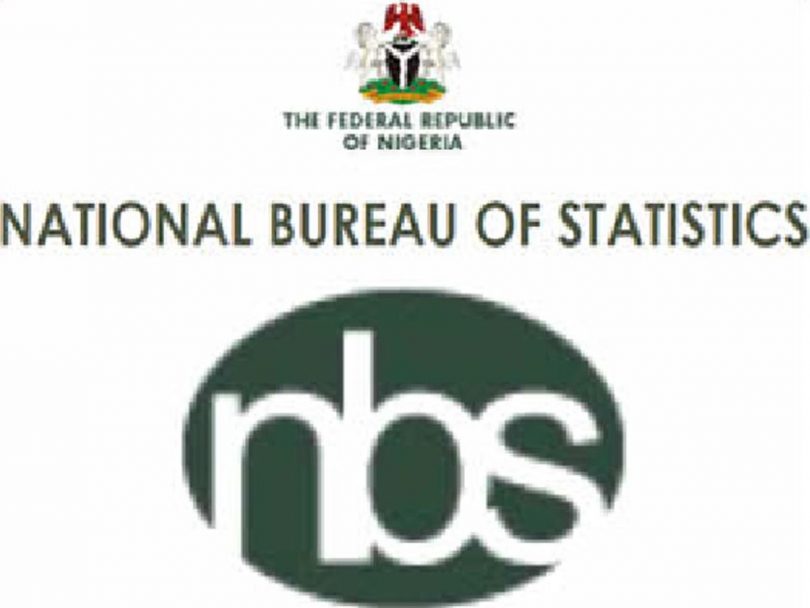 The National Bureau of Statistics (NBS), says the rate of inflation slowed by 0.37 per cent to 17.01 per cent Year-on-Year (YoY) in August from 17.38 per cent recorded in July.

The bureau said this in the “Consumer Price Index (CPI), August 2021” report released on Wednesday in Abuja.

The newsmen report that the inflation rate has been on a steady decline for five consecutive months.

It also said that increases were recorded in all Classification of Individual Consumption by Purpose (COICOP) divisions that yielded the Headline Index.

“On month-on-month basis, the headline index increased by 1.02 per cent in August, this is 0.09 per cent rate higher than the 0.93 per cent recorded in July.

According to the report, on a month-on-month basis, the urban index rose by 1.06 per cent in August, up by 0.08 per cent from the 0.98 per cent recorded in July.

It also said that the corresponding 12-month year-on-year average percentage change for the urban index stood at 17.19 per cent in the month under review.

This, it said, was higher than 16.89 per cent reported in July, while the corresponding rural inflation rate in August was 16.03 per cent compared to 15.73 per cent recorded in July.

The NBS said that composite food index rose by 20.30 per cent in August compared to 21.03 per cent in July.

This rise, it said, was caused by increases in prices of bread and cereals, milk, cheese and egg, oils and fats, potatoes, yam and other tuber, food product, meat and coffee, tea and cocoa.

It, however, said that on month-on-month basis, the food sub-index increased by 1.06 per cent in August, up by 0.20 per cent points from 0.86 per cent recorded in July.

Meanwhile, ”All items less farm produce” or Core inflation, which excludes the prices of volatile agricultural produce stood at 13.41 per cent in August, down by 0.31 per cent when compared with 13.72 per cent recorded in July.

The NBS said that on month-on-month basis, the core sub-index increased by 0.77 per cent in August, down by 0.54 per cent when compared with 1.31 per cent recorded in July.

“The highest increases were recorded in prices of shoes and other footwear, household textile, motor cars, garments, game of chance, major household appliances whether electric or not and hospital services.

“Others are catering services, appliances, articles and product for personal care and clothing materials, other articles of clothing and clothing accessories.”

The report said that in the month under review, all items inflation on YoY basis was highest in Kogi at 23.40 per cent, Bauchi 21.56 per cent and Oyo 20.32 per cent.

Meanwhile Bayelsa at 15.04 per cent, Rivers 14.73 per cent and Kwara at 14.64 per cent recorded the slowest rise in headline YoY inflation.

It said that on month on month basis however, August all items inflation was highest in Cross River at 2.65 per cent, Zamfara 2.05 per cent and Akwa Ibom 2.01 per cent, while Kaduna 0.20 per cent and Rivers at 0.14 per cent recorded the slowest rise.

“On month on month basis however, August food inflation was highest in Ekiti at 2.70 per cent, Abuja 2.62 per cent and Akwa Ibom 2.50 per cent, while Lagos at 0.04 per cent and Edo at 0.08 per cent recorded the slowest rise.

NAN reports that CPI measures the average change over time in prices of goods and services consumed by people for day-to-day living.

In the meantime, President Muhammadu Buhari says N300 billion has been disbursed to farmers while 1.6 million poor and vulnerable households are currently benefiting from the Conditional Cash Transfer programme.

The president revealed this while virtually declaring open the 14th Annual Banking and Finance Conference of Chartered Institute of Bankers of Nigeria in Abuja on Tuesday.

According to him, some of the various initiatives embarked upon to boost agricultural trade in Nigeria include the Anchor Borrowers Programme.

He stated that the Central Bank of Nigeria had made more than N300 billion available to over  3.1 million smallholder farmers of 21 different commodities.

“It is on record that 80% of rice consumed in Nigeria is now produced locally,’’ he said.

“From this number, 1.6 million poor and vulnerable households, comprising more than eight million individuals are currently benefiting from the Conditional Cash Transfer program, which pays a bi-monthly stipend of N10, 000 per household,’’ he said.

President Buhari said the National Social Investment Programme was biggest in Sub-Sahara Africa and one of the largest in the world.

He said the company was being managed by an independent infrastructure Fund Manager.

“The Solar Power Naija project was launched in April 2021 with the aim of delivering five million off-grid solar connections to Nigerian households.

“In May 2021, the Rural Electrification Agency announced the planned deployment of solar-powered grids to 200 Primary Health Centres and 104 Unity Schools nationwide.

“Under the Family Homes Fund Limited, Social Housing programme incorporated by the Federal Government of Nigeria, more than two thousand hectares of land with title documents have been issued by 24 states with the capacity to accommodate about 65,000 new homes.

“The Central Bank of Nigeria is providing a N200 Billion financing facility, with a guarantee by the Federal Government,’’ he said.

The president affirmed that the theme of the conference, “Economic Recovery, Inclusion, and Transformation: The Role of Banking and Finance’’ was most appropriate, following the global shocks from COVID-19.

“I salute the Institute and the entire banking and finance industry for the commitment towards charting a practical path for economic recovery and transformation of our country, Nigeria, and by extension Africa as epitomized by the theme of your conference.

“I commend the financial services industry for its interventions and contributions towards the promotion of financial inclusion and literacy in our country.

“And more importantly, the roles played by the banks in fostering economic growth of the country.

“I am confident that the speakers that have been carefully selected to contribute to conference will share insights that will help individuals, businesses and governments at all levels make necessary adjustments and take the right steps towards our collective resolve to position Nigeria as one of the top economies in the world,’’ he added.

The president said a report from the National Bureau of Statistics revealed that Nigeria’s Gross Domestic Product grew 5.01 per cent in the second quarter of 2021; the strongest rise since the fourth quarter of 2014.

“This is cheery news and an indication that the efforts of this administration at repositioning the economy is paying off,’’ he said.

He urged the bankers and financial institutions to leverage on the abundant business opportunities to grow the economy.

President Buhari implored financial institutions to play stronger role in making sure the Nigerian Small and Medium Enterprises were fit for purpose, with support in full implementation of “Agreement”.

“Indeed financial intermediary could not be any more relevant than at a time like this.

“We need you, the banks to drive value creation by developing new technologies, scaling payment infrastructure to serve the diversified economies expected to benefit from this Agreement,’’ he noted.

He said technological innovation was also important in the modern business terrain, noting that most transactions now take place online given the advent of the “Internet of Things”.

The president stressed that as the nation continues to progress towards the next frontiers of digitization, it must harness all opportunities while being mindful of the inherent risks.

“For example, the protection of data is now of utmost importance to provide users with more secure access to the online space,’’ he said.

President Buhari said the Covid-19 pandemic changed everything in the world, from interaction, work, communication to general lifestyle.

He noted that the epidemic also triggered new opportunities which helped to reshape the economy in the areas of digital transformation, trans-African trade, financial inclusion, security, workforce of the future, pharmaceutical, manufacturing, processing, supply, and logistics.

“As we look beyond the effects of the pandemic to the future, there are bountiful opportunities ahead of us. As you all may know, the African Continental Free Trade Area, of which Nigeria is subscribed, is not only an opportunity for the growth of trade but also the growth of Pan African businesses.

“It portends opportunities for our teeming youth population, the women, the creative industry, the digital economy, the financial services sector, agricultural value chain, commerce, industry, education and indeed every aspect of the economy as Nigerians will have unfettered access to the over 1.3billion consumer market,’’ he said.

The President commended CBN, working in collaboration with the Bankers’ Committee, for providing single-digit financing to young Nigerians in the fields of fashion, film, music and Information Technology through establishment of the Creative Industry Financing Initiative.

In a goodwill message, President Paul Kagame of Republic of Rwanda said exploring new technology in the banking sector, with more focus on innovation, would enhance financial inclusion.

“The banking sector can lead the way in integration. Banking is about trust,’’ he said.

The CBN Governor, Godwin Emefiele said the regulatory body had been working with the Bankers Committee to scale the challenges posed by Covid-19, which include reduction of interest rates on loans, increasing the moratorium for payments, and injecting N3 trillion loans in the private sector.

“We do expect that the pace of inflation will moderate as we approach the harvest season,’’ he added.

He expressed the hope that banks would remain strong, resilient and healthy.

He said the N15 trillion infrastructure fund would be inaugurated in Oct. 2021.

According to him, innovations like the Nigeria/International Financial will provide a gateway for capital and investments, and digital currency, e-naira, will enhance inclusion.