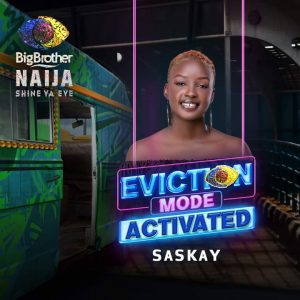 Yousef and  Saskay, Big Brother Naija, Shine Ya Eye housemates, were on Sunday evicted from the television reality show.

This was announced by Ebuka Obi-Uchendu, the host of the show, during the live eviction session.

Yousef from Plateau, was a teacher before joining the show on July 24, while Saskay was an Artist from Adamawa State.

Saskay during the eviction show said she wished to actualise her plans of building a retirement home for the old in Nigeria, while Yousef said he was ready to welcome any endorsement deal that comes his way.

The housemates up for possible eviction were: Saskay, Cross, Emmanuel, Angel and Yousef.

Two had been evicted leaving Cross, Angel and Emmanuel safe.

The newsmen report that there are currently nine housemates in the show: Liquorose, Whitemoney, Saga, Pere, Emmanuel, Nini, Cross, Queen and Angel.

In another development,  Police in Ogun on Sunday warned the public against organizing prayer sessions at night, especially at forest area, to avoid being victims of kidnappers.

Police Spokesman in Ogun, DSP Abimbola Oyeyemi, gave the warning in a statement made available to newsmen, in Ota, Ogun.

Oyeyemi noted that the Ogun state police command has observed with great concern that, despite the series of warnings and security tips from the command, some members of public are still in the habit of organizing prayer sessions in the forest, thereby making themselves easy prey for kidnappers.

“However, in as much as the command is not oblivious of right to freedom of religion, it is worthy of note that the present security situation in the country does not favorably disposed to organizing prayer sessions in isolated places,” the PPRO said.

He appealed to the public to refrain from creating opportunities for kidnappers to operate as the command was working assiduously to get rid of the criminal elements, who turned kidnapping into business.

Oyeyemi explained that security should be seen everybody’s business and “we should all play our part in securing ourselves and our property, adding that after all the scriptures even enjoined us to watch and pray.”

“However, if there is any compelling reason to embark on such prayer sessions, the organizers should report to the nearest police station for advice and possible security patrol of the area.