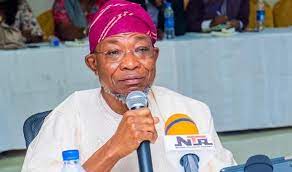 The Minister of Interior, Mr  Rauf Aregbesola, said the Federal Fire Service (FFS) saved about 166 lives, rescued 82 persons in distress from fire and other related emergencies in the second quarter of 2021.

A statement by his Media Adviser, Mr Sola Fasure on Tuesday, stated that Aregbesola made the disclosure at the inauguration of the modern fighting truck deployed by the Federal Government to compliment firefighting in Taraba.

“It is noted that 2020 into 2021 has witnessed frightening fire incidents, ranging from markets to gas and pipeline fires around the country.

“Statistics at our disposal show that the FFS in the second quarter of 2021, received 638 fire calls from which regrettably, 27 lives were lost and property estimated at N3.017 trillion destroyed.

“The FFS saved property worth over N15.1 trillion,” Aregbesola noted.

The minister, however, thanked President Muhammadu Buhari for his resolve to strengthen the service, while noting that the President’s support to all the services in his ministry had been immense.

“I must thank the President for his continued support for the ministry and its agencies.

“It pleases me to state that the delivery of the fire truck to the state seen today is indeed further testimony of the President’s resolve to reposition the FFS for better service delivery.

“In line with its core mandate, which include humanitarian and emergency services.

“I must say that since the inception of this present administration, FFS has experienced a phenomenal transformation from a moribund department to a vibrant organisation equipped with modern firefighting equipment.

“And today, we are here to deliver one of the firefighting trucks to the service in Taraba command, and to be manned by well trained, dedicated and committed personnel.”

Aregbesola also noted that the equipment being inaugurated was part of the N10.4 billion infrastructure upgrade approved by the Federal Executive Council (FEC) on March 3,  comprising  44 firefighting engines and 15 water tankers.

As well as 15 rapid intervention fire engines (not conventional ones) that could go into the nooks and crannies to respond to distressed calls and 20 basic life support ambulances.

The minister, however, urged the state government to invest in firefighting equipment for its own state fire service, as the role of the FFS was only complimentary and firefighting services fell under the concurrent legislative list.

“It is important, however, for state governments to establish a robust fire service to complement what the  FFS is doing in their respective states.

“It is only when we have this complementary service that we can be rest assured that fire will not pose much threat to us in the preservation of lives and property.

“We must therefore, not restrict fire service requirements or needs to state capitals or urban centres alone.

“Provisions should be made for Local Governments and rural areas, which have been victims of fire incidents and other emergencies as well. Farms and valuable economic trees have also been destroyed by fires in rural areas.”

The minister also urged the state to take advantage of the Fire Marshal and Warden Scheme of the service to train volunteers for humanitarian services.

“It is on this note that I will encourage your governor to take advantage of the novel Fire Marshal and Warden scheme within FFS to train and equip volunteers within the state,  to join forces with the regular corps.

“The people should also position themselves to be in the best place to secure their lives and make it easy for government to help them.

“Eternal vigilance is the price of liberty. Everyone should be sensitive to and watchful of developments around them, especially matters that should be of security concern.”

In his remarks, the Controller-General of the FFS, Dr Ibrahim Liman, prayed the state governor to also extend a hand of support to the service in the state.

Liman added that the deployment of the modern fire service truck to the state was meant to assist the firefighting efforts on the state.

He noted that the responsibility of firefighting was a joint efforts between the Federal, state and local governments.

“The fire truck we are inaugurating today is a huge national asset, requiring optimum maintenance and fuelling. We craved the indulgence of the state government to facilitate deployment of utility vehicles to support the operation of the vehicle.

“We want you to sponsor personnel of the state fire service for local and foreign training in view of emerging trends in firefighting and inclusion of the FFS in the State Security Council.”

Also, the Taraba governor , Mr Darius Ishaku, stated that shortly upon assumption of duty in 2015, he realised the need to overhaul the fire service system in the state to meet the service primary objectives.

This, he noted, in area of protecting lives and property in the event of a fire disaster, as well as rescuing and protecting people involved in traffic accidents and emergencies.

“We overhauled the state fire service by carrying out regular officer training, ensuring efficiency, discipline, increased morale, and the safety of all firefighters across the state’s fire command.

“We make sure that the service operational vehicles are adequately maintained and functional for speedy response to crises 24 hours a day, seven days week.

“Chemical foam, a vital component for fire suppression, is also constantly procured to promote a state-wide operations,” the governor said.

Ishaku commended the minister for bringing much desired change to the FFS and other services under the ministry, noting that things had so far changed for good,  since his coming on board.

“I must not fail to appreciate the minister for instituting the much desired change in the nation’s security services, especially for agencies under his watch.

“I recall his brilliance and eloquence during the National Executive Council (NEC) meetings when he was governor in Osun.

“President  Buhari indeed made the right choice in your selection and the good fruit is there for all to see,” the governor added.