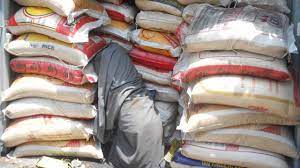 The Nigeria Customs Service (NCS), Kano/Jigawa Command, says it seized only 707 bags of smuggled rice and other items with Duty Paid Value of N41.3 million between July and September.

The Command’s Comptroller, Mr Suleiman Umar, made the disclosure on Thursday in Kano at a news conference on the achievements recorded by the command.

He said Customs however seized 155 bales of second-hand clothes, 130 cartons of spaghetti and 16 jerry cans of vegetable oil.

Other seizures made were 231 cartons of milk, eight cartons of macaroni, 30 packs of mosquito coils, 10 cartons of dry cell batteries and six cartons of snuff made in Ghana.

“Let me state clearly that the Customs and Excise Management Act (CEMA), empowers us to search premises for smuggled goods.

“CEMA also empowers us to patrol freely and to make arrest where applicable in order to enforce government’s fiscal policies,’’ he said.

The comptroller added that the command collected N16.9 billion revenue between January and August, 2021.

Umar said the command would not relent in its efforts at ensuring a secured atmosphere for businesses to strive in Kano and in Jigawa States.

He urged the media to continue to enlighten the public on the need to shun smuggling and pay accurate duties.

“We assure the people of our cooperation in facilitating legitimate trading’’ he said.

In the meantime, the Kano/Jigawa Command of Nigeria Customs Service (NCS), on Thursday handed 185 cartons of unregistered and expired drugs worth N200 million to the National Agency for Food and Drugs Administration and Control (NAFDAC).

He said that the drugs were seized by the command from smugglers from July to date.

“The patronage and consumption of unregistered, hard and expired drugs are of great concern due to their consequences on our teeming youths.

“Most criminal acts are carried out under the influence of these hard drugs; we will continue to stop it at all cost,” the controller said.

Umar assured that the customs service would continue to carry out its enforcement duties with utmost professionalism and caution, based on actionable intelligence information.

He urged the public to continue to cooperate with the service, so as to insulate the economy from smugglers and protect people’s health.

In his remarks, the NAFDAC coordinator appreciated the existing synergy between his organisation and the customs service in tackling the movement of illicit drugs in the country.

“You have saved so many people from the dangers of such drugs if it had gone into circulation,” Muhammad said, and urged the people to expose those dealing in illicit drugs.

He also advised the people to patronize only registered pharmacies, to avoid consumption of expired drugs.