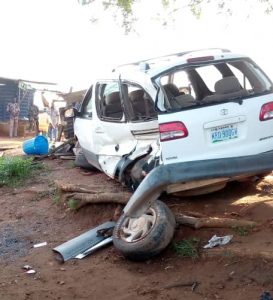 The Toyota Sienna car involved in the accident

… As FRSC cautions on dangers of boarding commercial vehicles on highways***

Two persons were killed on Saturday when a Toyota Sienna car rammed into some commuters on the Lagos-Abeokuta Highway.

Seven other persons sustained varying degrees of injuries in the accident.

Mr Babatunde Akinbiyi, spokesperson of Ogun Traffic Compliance and Enforcement Corps (TRACE) confirmed the incident to the newsmen in Abeokuta.

“The accident was caused by excessive speeding and loss of control on the part of the Toyota Sienna driver,’’ he said.

The TRACE spokesman noted that the accident involved 10 persons; five of them male.

“According to eyewitness report, the Toyota Sienna driver was on top speed and in the driver’s attempt to avoid a ditch, he lost control and ran into commuters waiting by the roadside to board a bus to their destinations.

“In the process, two persons died, a minor (whose mother survived the accident) and an old man, while seven other commuters were injured, with one person escaping unhurt.

“The driver of the Toyota Sienna has been arrested and taken to Itori Divisional Police Station with the vehicles involved in the crash,’’ Akinbiyi said.

He added that the injured were taken to nearby General Hospital, Ifo, while the deceased were deposited at the morgue of the same hospital.

Akinbiyi admonished drivers to avoid excessive speeding and advised traders to stop displaying their wares on the roadside while commuters should always stand at designated bus stops to board vehicles to their destinations.

In the meantime, the Federal Road Safety Corps (FRSC) has cautioned Nigerians, especially youths on the dangers of boarding commercial vehicles on highways when embarking on long journeys.

Commanding Officer of FRSC Zone 9, Mr Francis Udoma, gave the warning on Saturday in Enugu when he spoke with the newsmen.

Udoma said that boarding commercial vehicles at designated parks gave passengers the opportunity to do proper documentation or registration for the journey as they’d fill the manifest form.

He said passengers also have the opportunity of collecting due receipts that have the contact and other addresses of the transport company and the vehicle used.

“If you board commercial vehicle on the highway, there are many dangers associated with it; first, is that when the driver drives recklessly or displays bad road habits you have no one to complain to.

“Two, if the driver decides to stop on the way or the vehicle breaks down, you have no one to complain to and it will be difficult for the driver to trans-load the passengers.

“Third, if you peradventure enter a “one-chance’’ vehicle, they will rob you of all your belongings and you have no one to complain to or to seek redress from.

“Fourthly, that commercial vehicle you are boarding along the road might turn out to be a vehicle carrying candidates for ritual sacrifice and manipulation.

“Lastly, if there is an accident involving the vehicle you entered on the roadside, be sure that nobody can trace the identity of the passengers, driver or where the vehicle is coming from.

“So, it might take a long while to get proper medical attention or help if there is no Good Samaritan or law enforcement agencies like the FRSC around the vicinity where the accident occurred,’’ he said.

Udoma, who is in-charge of Abia, Ebonyi, Enugu and Imo states, appealed to transport companies and drivers to desist from embarking on night journeys.

He noted that there was high tendency of drivers on night journeys to fall asleep at the wee hours of the day when the temperature is low and the driver is exhausted.

“The FRSC is seeking assistance from transport companies and drivers to stop all forms of night journeys, especially as the year draws to an end.

“Plan the journey early and leave early aiming at your destination before nightfall.

“Where the journey is more than 12 hours or thereabout, when it is night and it is getting late stop the journey and find a place to spend the night and continue the journey the following morning,’’ he added.