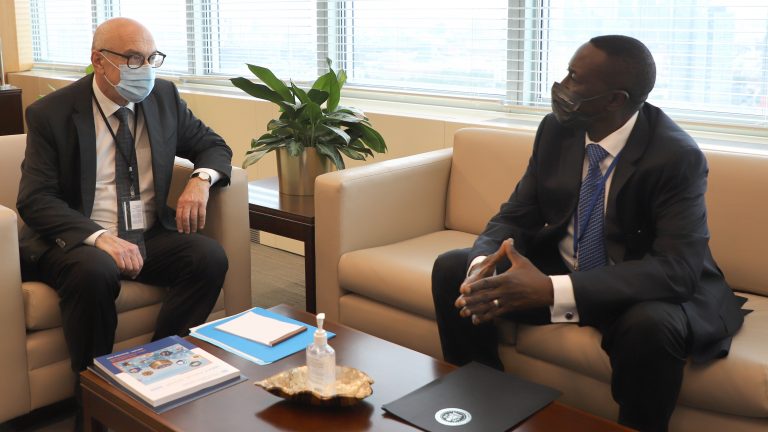 The Under Secretary-General of the UN Office of Counter-Terrorism (Left), Mr Vladimir Voronkov, and the National Security Adviser (NSA), retired Maj.-Gen. Babagana Monguno, during a closed-door meeting on the margins of the UN General Assembly at the UN headquarters in New York.

The National Security Adviser (NSA), retired Maj.-Gen. Babagana Monguno, has solicited the support of the UN Office of Counter-Terrorism (UNOCT) to tackle the scourge of terrorism and violent extremism in Nigeria and the West African sub-region.

Monguno told the newsmen in New York that Nigeria and the sub-region needed the international community to support and sustain the country’s efforts in the fight against terrorism and insurgency.

Monguno also expressed Nigeria’s readiness to collaborate with UNOCT in rendering humanitarian support for victims of terrorism in Nigeria’s North-East.

The NSA said Nigeria has had a long working relationship with UNOCT and would continue to partner with it to combat terrorism in the country and the sub-region. 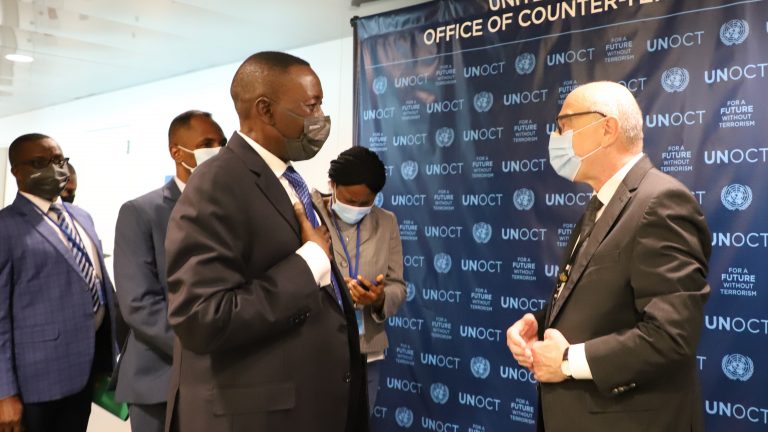 The National Security Adviser (Left), retired Maj.-Gen. Babagana Monguno and Under Secretary-General of the UN Office of Counter-Terrorism, Mr Vladimir Voronkov, after a meeting on the margins of the UN General Assembly at the UN headquarters in New York.

Newsmen report that the Nigerian security officer held a closed-door meeting with the Under Secretary-General of UNOCT, Mr Vladimir Voronkov, on the margins of the ongoing UN General Assembly.

“The focus of my discussion with the Under Secretary-General of UNOCT was mainly to look at current and emerging issues on counter-terrorism and extreme violence,” he said.

“I discussed the need for us to look at new challenges in a more comprehensive manner, especially looking at the non-kinetic aspects of fighting terrorism and violent extremism.

“These are no longer solely Nigeria issue but a completely regional problem.

“I also told him that Niger, Cameroon, Chad had their own inherent peculiar problems, which is capable of slowing their progress with us in the Multinational Joint Task Force,’’ he said.

Monguno stressed the need to look at ways to involve all the countries across the globe in dealing with terrorism, particularly in a non-kinetic manner.

He said the issues of small arms, light weapons and other problems have been affecting the country’s fight against counter-terrorism and violent extremism.

According to him, the UN counter-terrorism chief has given assurances of partnering with Nigeria and also canvassed other countries of the world that are focusing on the fight against terrorism to join hands together with Nigeria.

“We have been collaborating on softer issues of building trust within the local communities, issues of regulating non-governmental organisations in working with the people.

“Also, UNOCT is trying to work with some institutions in Nigeria like the Ministry of Humanitarian Affairs on ways to build the institutions of government together to deal with those areas that we cannot deal with using military force.’’

Other issued discussed with the UN counter-terrorism chief are strengthening border security management, combating terrorism financing as well as improving the coordination of Civil Society Organisations’ engagements in preventing and countering violent extremism in Nigeria.

The meeting between the NSA and Coninsx discussed Nigeria’s progress in combating terrorism and violent extremism, supporting victims of terrorism, de-radicalisation and prosecution of suspected terrorists as well as global support to the country.