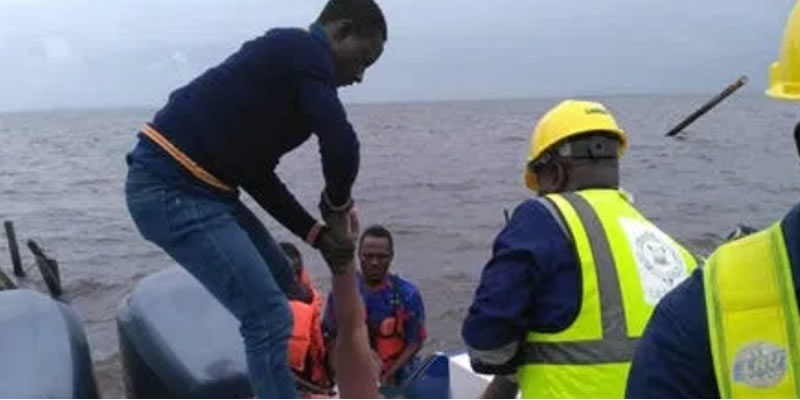 … As Lagos Police Commissioner directs officers to beef up security***

The National Inland Waterways Authority (NIWA) has confirmed one death while 16 passengers were rescued when an Ikorodu bound boat capsized shortly after it departed CMS Ferry Terminal at 4.35 p.m.

The NIWA, Lagos Area Manager, Mrs Sarat Braimah, made the disclosure in a statement made available to newsmen in Lagos on Monday.

Braimah said that the boat was involved in an accident 15 minutes after it left the CMS terminal.

“A 17 passenger boat named “TEMI 3 Global” which departed from CMS Ferry Terminal at 4:35p:m enroute Ikorodu Ferry Terminal on Sept. 27, was involved in an accident.

“Fifteen minutes into the journey near Adekunle Waterfront, the boat hit an underwater obstacle which broke the hull of the boat and this resulted to the capsize of the boat.

“Also the Marine Police, fishermen and other boat operators leading to the rescue of 16 persons alive while one person died while on the way to the hospital.

“We sincerely condole with the family of the deceased and pray for the soul of the dead to rest in perfect peace,”.

The South West Public Relations Officer of the National Emergency Management Agency (NEMA), Mr Ibrahim Farinloye, also confirmed the incident in an interview with the newsmen.

He said that the passengers were rescued with the support of local divers immediately the incident happened.

The newsmen report that the local divers were trained by the Lagos State Government.

In another development,  Commissioner of police in Lagos State, Hakeem Odumosu, on Monday directed officers and men to beef up security as the year draws to an end.

Odumosu gave the directive at a routine briefing with field and tactical Commanders and Heads of Departments.

This is contained in a statement signed by the command’s spokesman, CSP Adekunle Ajisebutu.

Odumosu said the directive became imperative against the backdrop of activities of hoodlums in traffic snarls.

The police commissioner charged all Divisional Police Officers and Area Commanders to provide adequate security at road construction sites to curtail traffic robbery and to also control gridlocks in affected areas in the state.

He said that the proactive steps would make Lagos roads secure, safe and more comfortable for motorists and other road users.

The police boss commended officers and men of the command for their selfless services in the face of daunting challenges that confronted them in the line of duty.

Odumosu admonished the officers and men not to be discouraged by the death of CSP Kazeem Abonde, who was brutally killed during a raid on criminal hideouts at Ajao Estate on Sept. 23.

He assured that the deceased officer would not die in vain.