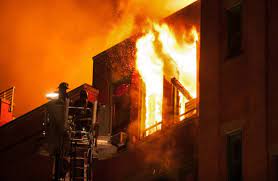 The Federal Capital Territory (FCT) Fire Service has confirmed that a man was left injured after fire gutted the Federal Ministry of Education area of the Abuja Federal Secretariat on Wednesday evening.

FCT Fire Service Public Relations Officer (PRO), Mr Ibrahim Muhammad, told the newsmen, that the man, yet to be identified as at the time of this report, sustained a leg injury.

“One person who probably decided to work after office hours at the secretariat was injured in the leg but there is no fatality.

“The annex area of the secretariat where Zenith bank is located was affected by the fire but the situation is currently under control with firefighters on ground,” he said.

Muhammad said that men of the fire service had been fighting the fire which affected the registry and records, accounts, pension and variation units since 8:00 pm on Wednesday.

“The fire occurred at the second floor and the cause of the fire is likely from a split air conditioner but further investigation is on,” he said.

Newsmen also report that at about 5:00 pm there was fire at a car park section of another area of the Federal Secretariat in Abuja.

In the meantime, the Federal Capital Territory (FCT) Fire Service, on Wednesday, dismissed rumours on some social media sites that the fire at the Federal Secretariat, Abuja, was caused by a generator at one of the secretariat’s car parks.

Mr Ibrahim Muhammad, spokesperson, FCT Fire Service, in an interview with the News Agency of Nigeria (NAN), said that an 18-seater Coaster bus was gutted by fire and was the only affected property in the building.

“An 18-sitter coaster bus at the parking lot was the one on fire at the Federal Secretariat and it was probably a staff bus. The fire started after the close of work, and at about 5:11 p.m when we were called, we turned up at the scene immediately.

“We were able to put the fire under control with the assistance of the Federal Fire Service but the bus was a write-off. We were also able to prevent the fire from spreading to other parts of the building,” he said.

Muhammad stated that no life was lost and called on FCT residents to contact the FCT fire service in case of a fire on its service hotline: 092906118.

He noted that it was necessary for all residents to save the phone number of the service in case of a fire emergency.

“We have sensitized people at the federal secretariat severally, but it’s not everyone that is serious and interested in saving our number.

“Although, we got several calls from residents at our control room regarding this fire, which is a positive attitude,” he said.