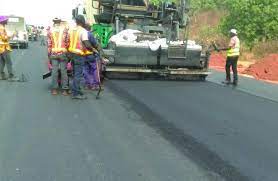 The Federal Government on Wednesday, says it will commit N75,765,087,178.28 to carry out palliative works on collapsed portions of roads across the country.

This, according to the Director, Highway Construction and Rehabilitation, Federal Ministry of Works and Housing, Mr Folorunso Esan, is to ease movement of people and goods during the Ember Months.

Esan disclosed this in Abuja at the meeting of stakeholders in the transport sector to plan and prepare making the roads motorable and ensure the safety of lives on the country’s highways.

He said the rainy season had affected many sections of the road across the country, hence the need for urgent palliative works to avoid further deterioration.

He said such bad roads have been identified, indicating that the affected roads had been mapped out and contracts for the repairs would be awarded to contractors as part of preparation for the ember months.

In his address, the Minister of Works and Housing, Mr Babatunde Fashola, appealed to stakeholders in the road sector to rededicate their efforts towards improving safety and sanity on the highways.

Fashola said that government is doing all it can to move Cargos by rail as it was fast and make the roads more durable.

“The President Muhammadu Buhari administration is making efforts to ensure that overloaded trucks no longer ply the nation’s highways.”

According to him, a measurement scale device installed on a computer will be put in place around the nation to ensure that trucks and haulage vans do not convey excess goods.

“You may not be aware of this, the government is building the Kano, Lagos and the Abeokuta pipeline and we want to see petrol tankers, timber going on railway and we hope this can relieve pressure on the road.

“I want to appeal to road users, NUPENG, NATO, NURTW and FRSC that we have to work together. Our responsibility is to ensure safety of the road users.

“All the data that we have about the road show us that most of the accidents on the road are as a result of speed violation.

Fashola said speed violation usually leads to loss of control, adding that traffic light violation, dangerous driving, wrongful overtaking, among others, are the causes of all road crashes across the country.

“If your vehicle is overloaded, you will pay fines, so the reason we have done that is that we want to make it cheaper to comply and make it very expensive to break the law.

“That way, we hope that people will choose to comply instead of paying excessive penalties,” he said.

On his part, the Corps Safety Engineering Officer of the Federal Road Safety Corps, Mr Rindom Kumven, said safety campaign are being launched in all our sectors and zonal commands across the country to create awareness for all road users.

“Along side road condition, surveys are being conducted to see the real conditions of the road and the report will also be forwarded to the ministry.

“We are also identifying the black spot which we have identified over time which can possibly pose a challenge to us.

“All these areas have been identified and are being addressed so that all Nigerians will have a safe travel throughout the ember months and beyond,” Kumven said.

Also speaking at the meeting, NUPENG Deputy National Chairman, Lucky Osezuwa, appealed to the government to make good the promise to fix the roads.

Others are the Federal Road Maintenance Agency, FERMA, and contractor handling the various road projects in the country, where they have promised to fix failed portions of critical roads across the Federation.

In another development,  Rep. Abubakar Kabir, Chairman, House of Representatives Committee on Works, has underscored the need for upward review of the proposed allocation for execution of various road projects across the country.

Kabir said this during the debate on the general principles of the 2022 budget estimates on Wednesday in Abuja.

This is against the backdrop of the 2022 Appropriation Bill presented by President Muhammadu Buhari before the joint session of the National Assembly.

The lawmaker,  while expressing concern over the state of federal roads and the need for adequate funding, said there was need to upscale the budget for the ministry of works.

Hr pointed out that the allocation to the Ministry of Works was inadequate, adding that only N280 billion was allocated in the 2022 budget.

He added that currently the country had about N640 billion certificates owing contractors.

“So, if we apply N280 billion against N640 billion for our outstanding certificates, that means in 2022 there is nothing we can see in any road infrastructure such as bridges and construction of roads.

“Of course the President has done very well in terms of initiation of SUKUK, NSIA, HDMI, they are doing very well.

“But honestly we need more funding, at least additional of N500 billion for massive development in road infrastructure,” he urged

He also called for the adoption of the policy on Tax Credit Scheme, where companies would be allowed to develop road infrastructure with tax holidays to the tune of the cost of the project.