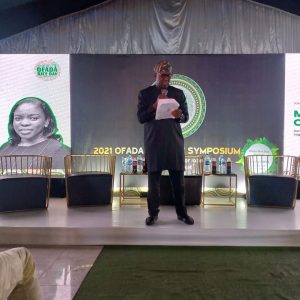 The Permanent Secretary in the Lagos State Ministry of Agriculture, Mr Hakeem Adeniji during the Ofada Rice Day Symposium in Lagos on Wednesday.

… As Sanwo-Olu urges responders to collaborate with locals during disasters***

The Lagos State Commissioner for Agriculture, Ms Abisola Olusanya, has urged Ofada Rice farmers in the state to re-brand the commodity for market visibility and bring it to a globally acceptable standard.

Olusanya gave the charge on Wednesday, in Lagos, at an Ofada Rice Day Symposium, organised by her Ministry and OfadaBoy, as part of activities to celebrate 2021 World Food Day in the state.

Newsmen also report that the Commissioner for Agriculture was represented by the Permanent Secretary in the ministry, Mr Hakeem Adeniji.

Olusanya said that the acceptability of the brand had been hindered by the method of processing and packaging.

The commissioner said that acceptability could be enhanced by reiterating and promoting the dietary and health benefits of Ofada rice and standard processing.

She said that to achieve standard processing, Ofada rice must be organic, and its grains should be odourless, homogeneous, free from impurities and appropriately packaged.

According to the commissioner, the state government is continually encouraging and empowering Ofada rice farmers.

She said that this was especially so with those in locations such as Ise and Obada, in the Ibeju Lekki Local Government Area of the state, to sustain and improve the local Ofada brand.

The commissioner said that the state government would continue to support farmers in the state, as well as encourage small and medium-scale agro-processors.

She said that government would create an enabling environment for private sector involvement, as it would go a long way in growing the state’s economy through agriculture and food sufficiency.

“The acceptability of this brand has been hindered by the method of processing and packaging.

“The locally processed Ofada rice has a pungent smell, because of fermentation during parboiling (soaking). There is also the issue of impurities such as the presence of stones in the rice.

“Most people have erroneously attributed the smell as a genuine property of Ofada rice and this does not meet international standard.

“To correct these errors and to put Ofada rice on the global map, the ‘Rice for Job Programme’ of the Lagos state government, in 2008, commenced the promotion of hot water soaking during parboiling.

“The dried paddy was then taken into a destoner to eliminate stones and other impurities during milling. This led to an increase in rice production in Lagos state and neighbouring states.

“This necessitated the establishment of the State’s cottage rice mills at Idena, Epe LGA and Ikoga, Badagry LGA, and a rice mill of 2.5 metric tonne per hour capacity at Imota, Ikorodu, in 2012.

“It is expected that no fewer than 250,000 direct and indirect jobs would be created along the entire rice value chain,” Olusanya said.

She noted that the theme of the symposium — “Repositioning the Brand for Local and International Markets”, is in tandem with the theme of this year’s World Food Day.

“The theme of the 2021 World Food Day is “Our Actions are our Future: Better Production, Better Nutrition, a Better Environment, and a Better Life”.

“These themes are indeed apt as they focus on ways to ensure that a variety of sufficient, nutritious and safe foods are available at affordable prices to the citizenry.

“This is what makes a sustainable agri-food system,” the commissioner said.

In another development,  Dr Ibijoke Sanwo-Olu, Wife of the Lagos State Governor, on Wednesday urged all agencies of emergency responders to ensure proper coordination with the locals at incident scenes in order to manage and prevent disasters.

Sanwo-Olu said this at the Y2021 International Day for Disaster Risk Reduction held at Alausa, Lagos.

The newsmen report that the event is observed annually to promote a global culture of risk awareness and disaster reduction.

The theme for this year is “Disaster Risk Governance: International Cooperation for Delivering Countries to Reduce their Disaster Risk and Disaster Losses.”

She urged them to forge ahead in preventing and managing disasters and as well ensure proper coordination between the Agency’s officials and the locals at incident scenes.

In his remarks, Mr Tayo Bamgbose-Martins, Commissioner, Special Duties and Inter-Governmental Relations, said that the state’s THEMES Agenda showed the premium placed on the wellbeing of residents especially in providing security and emergency facilities in the state.

Bamgbose-Martins stated that as at Sept. 30, LASEMA had responded to over 1,300 major emergencies, saving lives and property worth billion.

He said: “These incidents have not only affected the state but also individual households and businesses experienced losses.”

The commissioner, therefore, urged everyone to always prepare for emergencies and to always ensure disaster risk assessment.

Oke-Osanyintolu noted that working together was the solution when talking about disaster risk management.

According to him, “LASEMA stands ready to support Moving from commitment to Action”

“In the last decade, we have witnessed a steady increase in the number and magnitude of emergencies and disasters in Lagos State; some of these have caused tremendous economic damages and with losses of thousands of human lives.

“LASEMA is responsible for the coordination of both natural disasters and complex emergencies
“LASEMA has responded to nearly every major disaster in the state.

In so doing, it has accumulated considerable knowledge and experience,” he said.

The director general also stated that in disaster response, LASEMA had developed a comprehensive system.

He added that the system included a 24-hour duty system, deployment of pre-hospital care team, issuing situation reports, increasing its efforts to support strengthened resilience, and immediate relief to the internally displaced through a network of local emergency responders.

According to Adeniyi, hazards come with risk but it should be properly managed to avoid disasters.

I advise everyone to always ensure disaster risk assessment to avoid disasters.

Newsmen report that the highlight of the event was the award of recognition to the wife of the Governor, Dr Ibijoke Sanwo-Olu and officials from state emergency agencies.

The event was also attended by National Emergency Management Agency, Partners from Yobe, Ogun, Oyo, Kaduna, and other sister Emergency Agencies, among others.