The House of Representatives has mandated three of its committees to resolve the lingering crisis between the  Central Bank of Nigeria (CBN) technical committee on Comprehensive Import Supervision Scheme (CISS) and Adani Mega Systems Ltd.

This was sequel to a unanimous adoption of a motion by Rep. Leke Abejide (ADC-Kogi) at plenary, on Thursday.

Moving the motion, Abejide said that the CBN‘s committee had an agreement with Adani Mega Systems Ltd having engaged the firm as a service provider/vendor for screening service infrastructure for the inspection of all inbound and outbound cargo in Nigeria.

“Aware that a Build, Operate, and Own (BOO) agreement between the committee on CISS, (on behalf of the Federal Government of Nigeria), and Adani Mega Systems Ltd in relation to the provision of the scanning services infrastructures (scanners) required for all operations was sealed and a certificate of “NO OBJECTION” was granted by the Bureau of Public Procurement (BPP) after evaluating the profile of the company.

“Concerned that the level of engagement had reached the turning point whereby Adani Mega Systems Ltd had procured necessary equipment to commence the E-Customs projects as provided for in the contract.

“But since July 13, 2017, the project had stalled without solution in sight, further causing tremendous revenue loss to the Federal Government which, according to the Ministry of Finance, Budget and National Planning, had earlier appraised the project as having the potential of yielding up to $176 billion over the course of the 20 year concession period.

“The Nigerian Customs Service still remains in the analogue era of conducting 100 per cent physical examination, which in itself is a major cause of congestion to our ports and greater loss of revenue to our dear country.

“Worried that the dispute between the two parties is at such a time of alarming entry of undetected arms and ammunition into the country’s ports and border stations as a result of non functional scanners.

“The 2022 budget provided for N3.9 trillion for debt servicing alone, and this is aside repayment of the principal.

“If the E-Customs is allowed to take off by settling the issues between the CBN and ADANl, the issue of borrowing will be reduced to the barest minimum, if not eradicated.

“This is because the Nigeria Customs Service would be able to generate twice, if not thrice, of what is currently being generated. Despite all these obstacles, there is the possibility of the NCS to generate over N2 trillion this year 2021,” he said.

Leke said that in the interest of the country and to reduce Nigeria’s debt profile, the lingering crisis between the CBN’s committee and Adani Mega Systems Ltd needed to be urgently resolved.

The house resolved that its Committee’s on Customs and Excise, Finance, Banking and Currency, should invite the Governor of CBN, the committee on CISS, the Minister of Finance, the Controller General of Customs and the Managing Director of Adani Mega Systems Ltd.

In his ruling, the Speaker of the house, mandated the committee to resolve the matter for the take-off of the project and report to the House in four weeks.

Mohammed said that this would enable them acquire more knowledge to perform better in the face of modernisation.

The CAC spoke in Onne on Wednesday at the decoration ceremony of 115 newly promoted officers of the command, a statement by Ifeoma Ojekwu,  Public Relations Officer, Area ll Command Onne Port, Rivers, said on Thursday.

“ Every officer should show interest in the ongoing modernisation of the service operations through the e-customs project.

“Using artificial intelligence for customs purposes has been noted to be time saving, helps in achieving accuracy, prevention of mistakes and increasing overall productivity,” Mohammed is quoted as saying. 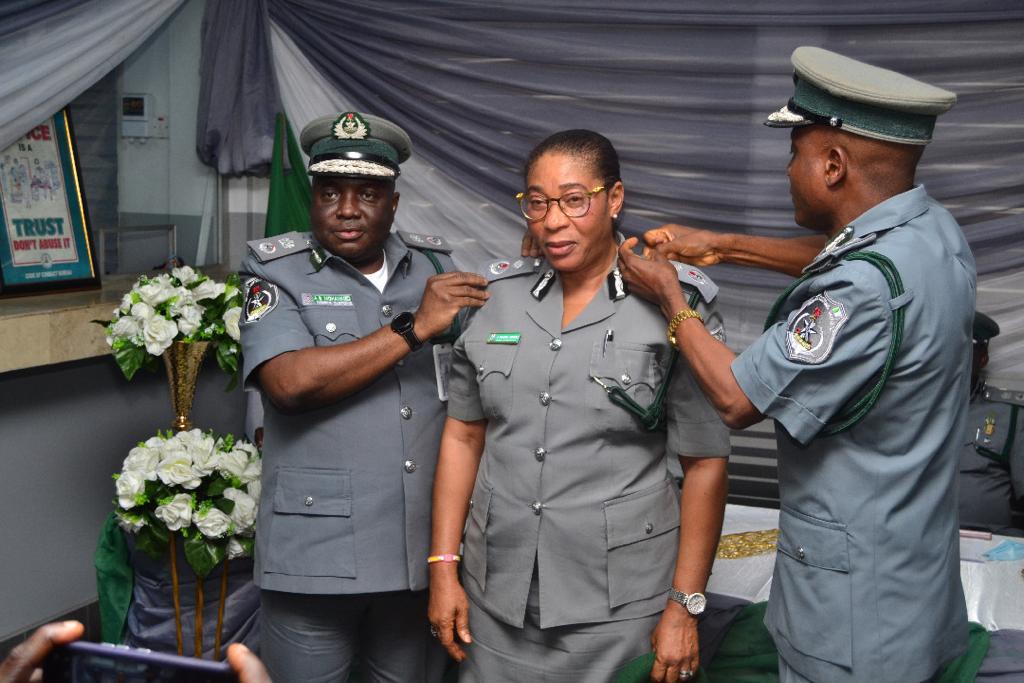 According to him, newly promoted officers of the command should see themselves as shining examples of an evolving modern Customs organisation that will be comparable with their peers across the globe.

He urged the officers to acquaint themselves with all stages of modern Customs operations as the approved e-customs project will require them to apply knowledge and skills at work.

“While you study the books of instructions, I enjoin you all to refresh yourselves or show interest in training and retraining in critical areas like scanner operation, image analysis, data capture, profiling and others.

“As you are aware already, modern Customs is knowledge driven and a good way to justify the confidence reposed on you by the Board and Management is to focus on developing your knowledge in these important areas of our function.

“This promotion will cause some of you to take superior responsibilities. Make it a point of duty to transfer knowledge to junior officers for ease of transition and seamlessness of our operations at all times

“Always uphold our procedure of hundred percent physical examination and be resolute to make seizures and arrests anytime offending items are discovered with suspects.

“As I have always said, this Command will remain a no go area for perpetrators of illicit trade or duty evasion. We are here to detect and arrest them anytime they dare us. We have done it before and will keep doing it.

“Keep up the good work and dedication to service that earned you these elevations and always be worthy examples as leaders wherever you find yourselves.

“For those who did not get it this time around, I urge them to brace up with hope. There is always another opportunity for promotion,” he said