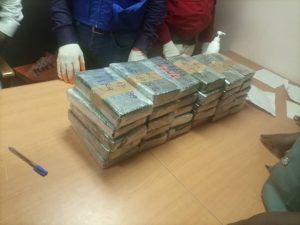 The intercepted wraps of cocaine

Mohammed told newsmen in Lagos that the arrest of the vessel’s 22 crew members who were mostly from Thailand was made possible through collaborative efforts between the Nigerian Navy and the other law enforcement agencies.

He commended the efforts of the International Police (Interpol), the Nigerian Customs Service (NCS),  the Nigerian Ports Authority (NPA) and the National Drug Law Enforcement Agency (NDLEA) for their quest for a safer maritime environment.

“Acting on credible intelligence from Interpol, the Nigerian Navy commenced tracking of the vessel suspected of attempting to smuggle narcotics into Nigeria.

“Using the Nigerian Navy Falcon Eye Maritime Domain Awareness System, the Navy monitored the vessel and discovered that the vessel departed Brazil in September and arrived in Nigeria on Oct. 8.

“Upon entering  Nigerian waters, the vessel was intercepted by NNS EKULU and escorted to NPA where the vessel berthed and was taken into custody by the Nigerian Navy,” he said. 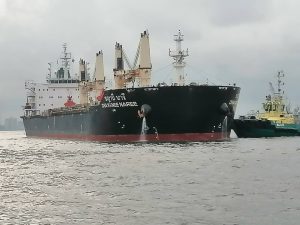 The commander said that other agencies were, thereafter,  invited to conduct an extensive and a comprehensive search of the vessel for narcotics and other contraband items which led to the discovery of cocaine.

“Accordingly, the substance was handed over to the NDLEA while further search and investigation have continued in every nook and cranny of the vessel.

“The success of this particular operation is as a result of the excellent synergy and collaborative efforts between the Nigerian Navy and the other law enforcement agencies.

“As we jointly continue this investigation and search of the vessel, additional information will be released to the press on the case,” Mohammed said.

He said that all parties involved in the nefarious act would be prosecuted according to the laws of the land.

Mohammed assured Nigerians that the Nigerian Navy under the leadership of the Chief of the Naval Staff (CNS), Vice Adm. Awwal Gambo, would continue to support other agencies in securing a secured maritime environment.

“We will continue to collaborate efforts to deny the use of the nation’s sea lanes for all forms of criminality that can negatively affect the wealth, peace and prosperity of our dear nation.

“The Navy will thus continue to work assiduously for a safe and secured Nigerian maritime space,” he said.

Representatives of the Nigerian Navy and other law enforcement agencies.

DCP Martin Nwogoh, Head, Interpol, Nigeria Police annex, Lagos State,  said that the search of the motor vessel was still ongoing and that they were hopeful to recover more narcotics.

Comptroller Ibrahim Yusuf, Comptroller, Apapa Area Command,  commended the synergy between the Nigerian Navy and the  other security agencies that led to the success of the arrest.

Mrs Mercy Thompson, Commander of narcotics, NDLEA,  said that the intelligence was received by the agency from the UK Border Force and Interpol.

“We swung into action and the Nigerian Navy has been helpful in divulging information to our agency from the high sea,” Thompson said.