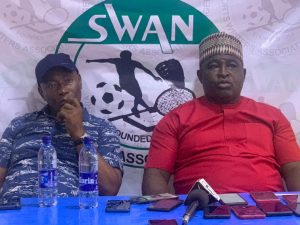 L-R Kingsley Okereke, Technical Representative on the board of the Shooting Sports Federation of Nigeria and President, Commodore Olatunji Bamidele during a press conference with journalists in Ilorin on Sunday at the ongoing 6th National Youth Games (NYG)

The President of the Shooting Sports Federation of Nigeria, Commodore Olatunji Bamidele, has pledged that the newly inaugurated board would not leave any stone unturned, especially in spreading the gospel of the sport through the provision of facilities and encouragement on participation.

While briefing journalists on Sunday in Ilorin at the ongoing National Youth Games (NYG), Bamidele said that his board would make available two world class shooting ranges in the country within the next two months.

“We have agreed as a board that the first thing we need to do is to develop shooting ranges.

“We have looked at Kano and Rivers States. Ranges would be done in the two states within the next two months,” according to him.

Bamidele believed that when that is done, they would be on the right track for the development of the sport.

“With a range in Rivers state, we would have Imo and Abia States to participate because they are close to Rivers,” he added.

“The board will be going to Kano State first, after which we will go to Rivers State. We pray that the state governments can help us sustain the training.

“Hopefully, we would get some talents from the states, as we also hope to reach all the zones,” Bamidele said.

On the ongoing NYG, he said that numerous talents have been discovered in shooting and efforts would be intensified to have them groomed accordingly.

“I can assure you that we have already discovered talents that can do Nigeria proud. We already have 15-year-olds already shooting like professionals,” he averred.

The president explained that shooting sport is a game that inculcates discipline in youths.

In partnership with the media, he said that plans are on for a robust relationship.

“We would include media in refresher courses in Abuja and also have a feel of what the athletes are going through.

“The media would be on ground, see what the athletes are going through so that they can get first hand experience,” he assured.