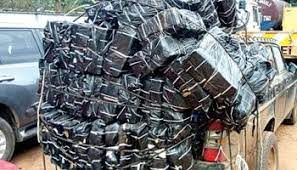 The district heads of Mani and Mashi, in Katsina State, Alhaji Umar Babani and Alhaji Kabiru Aminu, respectively, have warned their subjects against aiding and hiding smugglers in their communities.

They gave the warning during a meeting with officials of the Nigeria Customs Service (NCS) on Wednesday in Fadi Gurje village, Mani Local Government Area.

On his part, Babani, who is also the Durbin Katsina said that the meeting was to discuss and resolve the differences between NCS and people of the communities.

He recalled an incident that recently occurred at Fadi Gurji village were some customs operatives allegedly shot an innocent person while chasing some suspected smugglers.

“You allowed the smugglers to pass through your communities, that is why such things are happening.

“If you did not give them the chance to come through your areas, while you know they are operating illegally, you will not see the customs officers in your areas.

“Therefore, there is a need to understand the functions of the customs and stop attacking them while carrying out their national assignments.

“As traditional rulers, you are our priority, but that would not allow us to ignore our responsibility in ensuring the development of the state and the country in general,” Babani said.

He noted that what was happening between the public and the security operatives was as a result of a misunderstanding of their statutory duties.

On his part, Aminu, who is also the Iyan Katsina said if such a meeting could be sustained, it would bring an end to the existing misunderstanding between the customs officers and the public.

He commended the Katsina command of the NCS for paying the hospital bill of the injured person.

Aminu however, called on them to always be careful while discharging their duties.

He appealed to the residents to always respect the work of the customs officers and provide them with credible information about criminals.

Speaking on behalf of the NCS, Mr Baffa Musa, Deputy Controller, Administration, said the meeting would assist in encouraging them in discharging their duties.

“The command has organised a series of consultative meetings and sensitisation of border communities on the power and rights of the customs,” Musa said.

He sympathised with the family of the victim and the people of the area over the shooting incident, saying, investigation was still going on.

“We have three units operating along the border routes, apart from our Katsina command, we have a Kaduna zonal office and also a border drill.

”The NCS has the power to search and investigate a suspect even without a warrant,” Musa said.

In the meantime,  the National Park Service has condemned the illegal felling of trees across Nigeria’s forests reserves, warning perpetrators to desist from the act or face the law.

The Conservator-General of the Service, Dr Ibrahim Goni, gave the warning on Wednesday in Abuja, while briefing newsmen virtually on the government’s position on illegal felling of trees in the country.

According to Goni, the service will arrest and prosecute anyone found involved in illegal felling of trees in any of its national parks.

The conservator-general said reports had shown that some Nigerians still engage in illegal felling of trees which causes deforestation across the country.

“A safe, clean, healthy and sustainable environment is the foundation of human life. But today, because of human action the crisis of climate change are directly and severely impacting our lives and environment negatively.

“Deforestation affects us all, whether we realise it or not.

The conservator-general said that deforestation reduces biodiversity, the release of greenhouse gas emissions had been negatively affecting natural ecosystems and the climate.

“The service is fighting hard to stop forest destruction, our environmental campaigns together with other stakeholders are starting to pay off, but there is still a lot more to do,’’ he said.

According to Goni, there is a need to educate Nigerians on the dangers associated with deforestation.

He urged states governments to join in the fight against illegal felling of trees and deforestation in Nigeria, calling on all to report those illegally felling trees as well as their buyers to the appropriate authorities for appropriate action.

“People know these illegal loggers and their buyers, they live among us, and they should report them to the appropriate authorities because the evil they are covering will consume us all, if not nipped in the bud.

“We must work together to assist in addressing this and other crucial issues in our environment.

“Our office is open to collaboration and ideas and will continue to work on letting our people know the danger we face.

“This is a call to action for all well-meaning Nigerians to join in the fight of protecting our ecosystem,’’ he said.

Goni also said that the service had conservation education units in communities near all the national parks in the country called support zone.

These zones help to carry out campaigns often on why trees around the parks should not be felled.