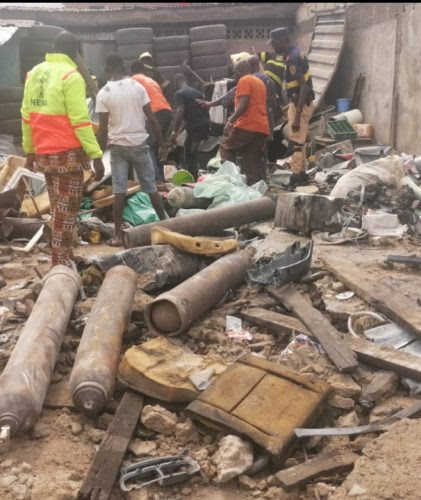 Farinloye said the cause of the explosion, which occurred on Tuesday morning at the shop located at 33/35 Ojekunle St. Ladipo Spare Part Market, Lagos was yet to be ascertained.

According to him, the shop had several industrial gas cylinders used for welding purposes.

“Unfortunately there were casualties.

Five persons were recovered dead including a 10-year-old boy and a woman,” Farinloye said.

He said the investigation by NEMA showed that the shop was earlier sealed because the side of the street was dedicated as mechanic village, which was not accessible to other users.

Farinloye said after some time, the seal and lock were removed before the incident occurred.

In the meantime, the Federal Road Safety Corps (FRSC), Bauchi State Command, says no fewer than six persons lost their lives in a ghastly motor accident that occurred in Bauchi on Monday.

The Sector Commander, Mr Yusuf Abdullahi, who confirmed the incident in Bauchi on Tuesday in an interview with the newsmen, said that 19 others sustained various degrees of injuries.

Abdullahi said that the accident which involved two Ford buses belonging to Galaxy Transport occurred in Gurum village, on the Bauchi-Kano road at 6:20 p.m. when the two buses had a head-on collision.

The sector commander, who said that it took the corps about 20 minutes to arrive at the scene to clear the site, attributed the cause of the accident to wrongful overtaking.

“25 people are involved in the crash comprising 23 males, one female and a female child.

“Six people died on the spot and they are all males. Nineteen others sustained injuries. Among them are 17 males, one female and a female child,” he said.

According to him, one of the drivers of the buses has been identified as Mr Ibrahim Abduljalal with the vehicle’s number plate: JJN 712 YX.

While the name and the number plate of the other vehicle were not available at the time of the interview.

The FRSC boss further said that the injured persons had been referred to the Abubakar Tafawa Balewa University Teaching Hospital (ATBUH), Bauchi for treatment while the remains of the deceased were also deposited in the morgue of the same hospital for identification.

He noted that the obstructions were cleared to allow for free flow of traffic while the vehicles were handed over to the Motor Transport Department of the GRA Police Station.

He advised motorists to always be conscious of traffic rules and regulations.