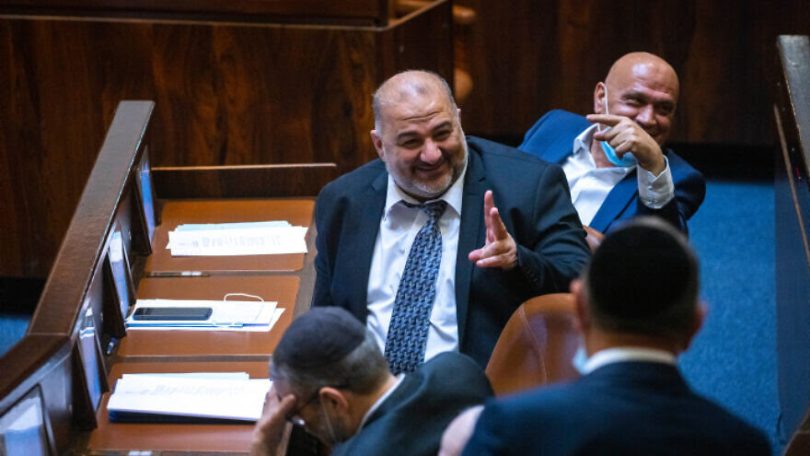 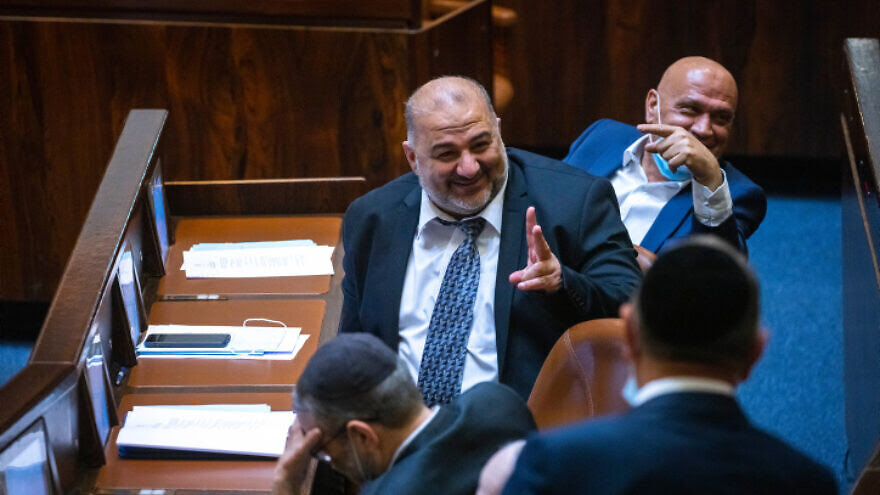 The mask is now off: Knesset member Mansour Abbas and his colleagues want to use their membership in the coalition as leverage to dismantle Israel’s Jewish identity.

When Prime Minister Naftali Bennett asked to meet with King Abdullah of Jordan in July, Abdullah agreed but insisted the meeting be kept secret.

When Bennett’s office leaked the meeting to the Israeli press, the regime-controlled Jordanian media largely ignored the story.

In stark contrast, Abdullah initiated his meeting Tuesday with Mansour Abbas, deputy head of the Southern Branch of the Islamic Movement and chairman of the Islamist United Arab List or Ra’am faction in the Knesset.

The Jordanians issued a detailed press release replete with an official photograph of the meeting and the news that it lasted a whopping four hours.

The king’s spokesmen said the men discussed the Palestinian conflict with Israel, the status of Jerusalem and the Temple Mount and other top-level strategic issues.

Why did Abdullah want to host and then play up a meeting with the leader of the smallest faction in Israel’s parliament? To understand his thinking, we need to look at the meeting in context.

Specifically, we need to understand what Ra’am is.

We need to look at the meeting against the backdrop of recent revelations about Ra’am’s relations with Hamas, and we need to see the meeting in the context of Knesset’s recent approval of the state budget.

Unlike Likud or Yamina or the Joint Arab List, Ra’am isn’t a free-standing party.

The Islamic Movement is more like a web than a tree.

His chairmanship of Ra’am is an outgrowth of his position in the Islamic Movement.

Other nodes in the movement are its non-profit groups. Two, in particular, stand out—Igatha 48 Association, and the Al Aqsa Association.

Virtually all of the past and current leaders of the two organizations also have senior positions in the Islamic Movement and Ra’am.

The group is run by its CEO, Ghazi Issa, and its Director-General, Ali Katanani.

Issa ran in the last Knesset elections as number 15 on Ra’am’s Knesset slate and serves as chairman of Ra’am’s party council.

Katanani ran in the 29ths spot on Ra’am’s Knesset slate for the last election.

Igatha 48 is a charity. It operates in Israel, Gaza, Judea and Samaria, Turkey, Sudan, Syria and Lebanon.

As the Ad Kan/Choosing Life report revealed, over the past decade, Igatha 48 has raised 224.5 million shekels ($72 million).

According to its website, the funds go to “orphans, widows, prisoners and their families, and the poor in general.”

From the group’s website, it is clear the “prisoners and their families” in question are jihadist terrorists.

In 2019, Igatha 48 opened an office in Gaza. Issa and Khatanani attended the opening ceremony, along with Hamas politburo member Ghazi Hamed.

At that event and on subsequent occasions, Hamed thanked Igatha 48 and the Islamic Movement for their assistance.

While wearing his hat as a Ra’am senior official, in early June, Issa joined Abbas in the coalition talks with Bennett and Foreign Minister Yair Lapid that led to Ra’am joining the governing coalition.

Issa is pictured in the official photograph of the negotiating session standing behind Abbas as Abbas, Lapid and Bennett shook hands after they finalized the terms of the coalition deal.

The deal with Ra’am gave Lapid and Bennett the bare 61-seat majority they needed to form the current government. So the man who won high praise from Hamas for transferring millions of shekels to Hamas-controlled Gaza to feed “prisoners and their families” is also the kingmaker of Israeli politics.

This brings us to the Al Aqsa Association. Abbas wasn’t alone in his meeting with King Abdullah. Sitting next to him was his colleague from the Islamic Movement, Kamal Alihan.

According to the Ad Kan/Choosing Life investigation, between 2007 and 2019, the association received 12.5 million shekels ($4 million) from Hamas funding foundations.

Al Aqsa’s bank account in Israel was seized in 2015 after the relevant government agencies determined it had received funding from Hamas-associated groups in contravention of Israel’s terror funding laws.

This week, the Kol Yehudi news outlet reported that during the so-called “knife intifada” terror campaign in 2015, the Al Aqsa Association published an article by Hamas terrorist Ahmad Aton.

Aton incited supporters of the association “to sacrifice,” for Jerusalem. “What was stolen by force will be liberated by force,” he wrote.

In the months that followed, 50 Israelis were murdered.

The Temple Mount was the focal point of the violence.

Mansour Abbas’s personal connections to Hamas are legion. According to The New Yorker, Abbas travelled to Doha, Qatar in 2014, where he met with Hamas politburo chairman Khaled Mashaal.

Two years later, he returned to Doha and met with Hamas military commanders.

In a follow-on report last week on Channel 13 News, Hasson reported that a few years ago, Abbas met with Israeli attorney Ephraim Damri and asked that he represent the Hamas terrorists who massacred Ruth and Ehud Fogel and three of their small children in their beds in 2010. Abbas and his Ra’am colleagues have travelled to Ramallah to meet with Hamas terrorists.

These reports, which document Ra’am’s manifold ties with Hamas, aired just as the Knesset passed the state budget last week.

The coalition deal Lapid and Bennett signed with Abbas and Issa stipulated that the allotment of all budgetary funds to Israel’s Arab communities would be done in coordination with the Ra’am-controlled Committee for the Affairs of Arab Society.

This means that to all intents and purposes, Abbas and his fellow Hamas supporters in Ra’am now control the funding of Israel’s entire Arab minority.

As Amit Barak, a veteran activist involved in integrating Arab Israelis into mainstream Israeli society, revealed this week, unlike its predecessor this plan has not been made public.

In a conversation with this writer, Barak said that the new situation is liable to have a profoundly adverse effect on Arab integration.

Rather than the government incentivizing Arab citizens and minority communities—like the Druze and the Circassians, whose sons are included in Israel’s compulsory military service law—to embrace their Israeli identity and integrate fully into Israeli society, it will incentivize irredentism.

As Barak put it, “The superpower that Ra’am has become in the Arab sector endangers the Arabs who are fully integrated or are considering integrating fully into Israeli society.”

And indeed, on Wednesday, the head of the Druze local council of Daliyat el-Carmel, Rafik Halaby, encouraged Druze to stop serving in the IDF and praised Ra’am and the Islamic Movement.

In his words, “I congratulate Mansour Abbas … for the efforts of the Arab representatives in the coalition, in contrast to the weakness of the heads of the Druze community.

Abbas won high praise from the media during May’s “Operation Guardian of the Walls” when he visited a firebombed synagogue in Lod.

But like so many of the things that Abbas does and says, that visit was deceptive.

Last week, Israel National News published an interview with a recently retired military intelligence officer dubbed “Lt. Col. A.” A. revealed that the Israeli Arab riots during Hamas’s most recent missile campaign had been coordinated with Hamas in Gaza.

“The proof of the coordination of the [two] terror fronts … was the fact that all the Israeli Arab riots ended immediately after Hamas decided to agree to a ceasefire,” he said.

“This is not a characteristic of a popular uprising.

Hamas exerted high-level control [of the violence in Israel] for the benefit of the joint Arab interest against Israel,” he added.

Like many members of the nationalist camp, I initially fell for Abbas’s charm offensive.

I perceived Abbas’s willingness to join a right-wing coalition government led by then-Prime Minister Benjamin Netanyahu as a domestic expression of the spirit of Arab conciliation with the Jewish state which stands at the heart of the Abraham Accords.

The seeds of the accords were planted a decade ago with the rise of Muslim Brotherhood parties to power in Sunni Arab states.

The Saudis and the Emiratis, who had financed and supported the Muslim Brotherhood for decades, suddenly viewed the jihadist movement as an existential threat.

In Israel, the so-called “Arab Spring” caused thousands of Arab Israelis to revisit their longstanding hostility towards Israel.

Many came to view their Israeli citizenship as their most precious possession—the one thing protecting them from the terror and genocide in places like Syria.

According to a 2013 University of Haifa survey, 90 percent of Arab Israeli youth supported participation in national service. For the first time in Israel’s history, Arab Israelis—particularly Christians—began volunteering to serve in the IDF.

Halabi’s statement drives home that this trend is being rapidly reversed. As the recent exposes of Ra’am all show, Ra’am’s outreach is no domestic Israeli version of the Abraham Accords.

It’s a wolf-in sheep’s clothing stunt. Like Hamas, Ra’am—and the Islamic Movement as a whole—is a Muslim Brotherhood organization.

Whereas Hamas carries out a violent jihad against Israel, Abbas told an Arabic-language media outlet that he is leading a “civil jihad” against Israel.

Abbas and his colleagues don’t want Arab Israelis to embrace their Israeli identity.

They intend to use their membership in the coalition to gain control over the Israeli Arab sector and transform it into a large, unified, irredentist front dedicated to dismantling Israel’s Jewish identity.

This brings us back to the four hours Abbas and Alihan spent with King Abdullah on Tuesday.

Attempts by Bennett’s office and initially by Abbas himself to play down the meeting and present it as a nothing burger didn’t survive the morning headlines in the Jordanian media, which celebrated the event as a major milestone.

On Wednesday, Abbas dropped the pose of innocent lamb for a moment and told Army Radio that unlike the leaders of the government he ostensibly serves, he supports the Biden administration’s plan to open a consulate for the Palestinians in Jerusalem.

Days before he abandoned the Likud-led right-wing bloc and formed the current government with Lapid and Abbas, Bennett admitted to me that he didn’t know what to make of Abbas’s willingness to join the governing coalition. But as he put it then, “It’s worth looking into the option” of working with Ra’am.

Today, the results are in.

Ra’am’s nature and intentions are totally exposed. Bennett and his colleagues must draw the appropriate conclusions before it is too late.

Caroline Glick is an award-winning columnist and author of “The Israeli Solution: A One-State Plan for Peace in the Middle East.”