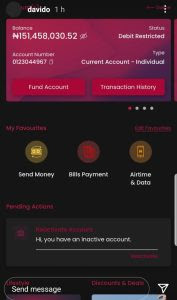 Nigerian singer David Adeleke (a.k.a Davido) has raised more than N151. 4 million after he shared his account details on his social media platforms on Wednesday.

The global star after opening a Wema Bank account on Wednesday posted it on all his social media platforms and called on his friends to donate one million naira each ahead of his 29th birthday which is Nov. 19.

He wrote: “If you know I’ve given you a hit song…send me money… una know una selves ooo,” he initially wrote on Instagram before adding his account details, “David Adeleke.”

“I know say una love me but una love me like this. Omo nah like joke I start this thing oh, N26m,” he wrote.

Meanwhile, it has been Naira rain for the music star as some fans also joined the donation train.

Some prominent businessmen, philanthropists and musicians also made donations into his account.

With the donations, Davido is said to have become one of the biggest socialites and social media influencers in Africa.