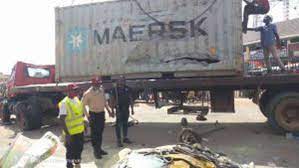 The Federal Road Safety Corps (FRSC) in Anambra said an accident involving two vehicles at Amansea junction, by Awka-Enugu Expressway, claimed the life of a female passenger on Thursday night.

The Sector Commander of the corps, Mr Adeoye Irelewuyi, confirmed the accident to the newsmen in Awka, on Friday.

Irelewuyi said the accident could be attributed to a bad road in the area.

“Eyewitness report indicates that the truck driver was carrying a container heading to Enugu, while the commercial bus driver was heading towards Awka.

“Due to the bad road along that area, the truck was not stable and the container fell on the bus and crashed it.

“Seven persons were involved in the crash – six male adults and one female adult. Five passengers inside the bus sustained injuries.

“The female passenger was confirmed dead by the doctor on duty at Chukwuemeka Odimegu Ojukwu University Teaching Hospital, Amaku, Awka, and her body deposited at the hospital morgue,” he said.

While condoling with the family of the dead, the Sector Commander said that a road audit had been carried out on the Amansea road and forwarded to the appropriate quarters for government to act on it.

In the meantime, the Oyo State Government has advised road users to use alternative routes following Thursday’s tanker explosion along the Agodi area in Ibadan.

Dr Akin Fagbemi, the Chairman, Oyo State Road Transport Management Authority (OYRTMA), in a statement on Friday, recalled that a PMS-laden tanker burst into flames on Thursday night at the Agodi gate area of Ibadan.

Fagbemi said the unfortunate incident had resulted in electric poles and cables dangling across the road.

He said that the agency was working with other relevant agencies to resolve the issue within the shortest possible time.

The chairman pleaded to commuters to drive carefully around the affected area until normalcy was restored.

“The incident which resulted to the slagging of electric poles and cables dangling across the road portends danger to motorists plying the route.

“Hence, in the interim, the authority has barricaded the way from Total-Garden to Agodi-Gate, Ibadan, to ensure the safety of commuters.

“Officials of relevant government agencies are working to evacuate the affected vehicles and restore normalcy,” he said.

Fagbemi said the agency had suggested alternative routes to vehicles intending to ply the axis.

“Motorists are advised to navigate towards the state secretariat at the Total-Garden Round-about to link the Government Road towards the Kola Daisi Civic Centre inwards Agodi-Gate to Iwo-Road.

“Alternatively, motorists could opt for the Premier Hotel road to link the state secretariat and move as above.

Fagbemi said that another alternative was for motorists to move from the state secretariat and navigate Ikolaba via the Nigerian Customs Zonal Hq. to get to Iwo-Road, Ibadan.