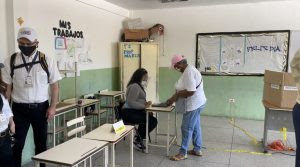 International Observers have commended the Bolivarian Republic of Venezuela for conducting credible and transparent elections in line with the tenets of democracy.

Some of the observers, who witnessed the electoral process of the country’s Regional and Municipal elections, made this known to the newsmen in Caracas.

They also commended the way both the majority and the opposition parties worked together to ensure the success of a peaceful election.

Prof. Philip Afaha, Head of Department, History and International Studies, University of Abuja, said that the election was well-coordinated.

According to him, it is a well-coordinated process, thanks to the Electoral Council that has put things together perfectly well.

“We noticed that people even come to vote with their pets and children which indicates the peacefulness of the whole process here.

“It is uniquely transparent in the sense that both the electronic procedures are combined with the manual procedures that we know.

“The combination of the electronic and manual is the main thing that has made it almost transparent and credible because when there is a hitch electronically, it can be corrected manually.

“In comparison, I think both the Nigerian system and the Venezuelan system are in a growing process. I met the opposition leader in the Miranda State and he came to introduce himself.

“We have a lot to learn from Venezuela because this is also a combination of what we are doing,” Afaha said.

Also from Nigeria, Hon. Abdullahi Candido, Chairman of the Abuja Municipal Area Council (AMAC), said that the elections showed the beauty of democracy with the peaceful participation of all political parties and citizens.

Candido said the eagerness of voters to cast their ballots also shows that they trust that their votes would count.

“Our observation is something equal to being transparent, very peaceful, and of course, an atmosphere that can be equated to see that the citizens are eager and sensitive to their responsibility.

“That on election day like this, everyone can be seen to wanting to vote.

‘’We went round and saw the beauty of democracy, people are not fighting, they are not doing anything to suggest there is thuggery.

“The electoral process was something closed to being perfect and we must give it to them,’’ he said.

Candido said that his team had been in the country for few days and saw how the people carried out their campaigns and on the eve of the election, all the political parties were dancing, celebrating.

“And, we have seen that today being the voting day people are doing their normal businesses,” he said.

Mr Marvin Gonzalez, an International Observer from the Democratic Socialists Organisation in the United States of America also said he and his team were satisfied with the electoral process.

“The Director of the polling station spoke to us extensively about the process, when they start, when they finish and when they expect the results to be calculated.

“We find it to be a very smooth process, a very transparent process and we are excited to be here,” Gonzalez said.

Newsmen report that over 500 International observers were invited from across the world by the Venezuelan government to have a first-hand assessment of its electoral process.

The Regional and Municipal elections of Venezuela had 3,000 candidates from different political parties contesting for 23 seats of governorship across the regions and 335 Mayorship seats across the municipalities.

In another development, the Philippines on Monday dispatched two boats to bring food supplies to soldiers stationed at a disputed shoal in the South China Sea.

This came a week after Chinese coast guard ships blocked and fired water cannons at them.

Lorenzana said “the Chinese ambassador assured me they will not be impeded,” adding that the envoy requested that the boats are not escorted by Philippine government ships.

He said a Philippine navy plane would be in the vicinity when the supply boats reach Ayungin Shoal to monitor the trip.

The supply boats are the same vessels harassed by the Chinese coast guard ships on November 16, which prompted the Philippine government to file a protest and tell Beijing to back off.

On Monday, President Rodrigo Duterte expressed concern over the incident in Ayungin Shoal during a video conference between leaders of the Association of South-East Asian Nations and China.

“We abhor the recent event in the Ayungin Shoal and view with grave concern other similar developments,” he said in a speech at the conference.

“This does not speak well of the relations between our nations and our partnership.”

Ayungin Shoal lies 105 nautical miles west of the Philippines’ province of Palawan and is within the country’s 200-nautical-mile exclusive economic zone.

The Philippine navy ship BRP Sierra Madre has been anchored in the shoal since it ran aground in 1999, marking the country’s claim to the area.

– With additional report from dpa