The Nigeria Ports Authority (NPA) has empowered 350 women and youths in Jega and Kalgo Local Government Areas of Kebbi State with vocational skills training and empowerment items to alleviate poverty.

Speaking at the distribution ceremony held separately in Jega and Kalgo on Sunday, the Permanent Secretary, Kebbi State Ministry of Budget and Economic Planning, Hajiya Aishatu Usman, commended the NPA for the kind gesture.

Usman urged other organisations, philanthropists, to emulate the NPA to assist the less privileged to acquire skills and become self-reliance.

She said that the gesture was timely and a right step in the right direction.

Usman enjoined the beneficiaries to make use of the items to become self-reliance in order to assist others in the nearest future.

They called on the beneficiaries to take advantage of the gesture to become self relaince.

While commending the NPA for the gesture, the traditional rulers described human development as a path to curbing the scourge of poverty and unemployment amongst the people.

In his remarks, the representative of the General Manager, Corporate and Strategy, NPA, Ali Garba-Bichi, said the gesture was part of the organisation’s Corporate Social Responsibility programme to Nigerians.

Garba-Bichi said that about 175 persons from each of the two LGAs would benefit from the gesture.

He enjoined the beneficiaries to always pray for peace and the socio-economic development of the country.

In the meantime, the African Development Bank (AfDB), has earmarked $110 million for projects under the Special Agricultural Processing Zone in Kano State.

The Chief Press Secretary (CPS) to Gov. Abdullahi Ganduje of Kano State, Mr Abba Anwar, stated this in a statement issued in Kano on Sunday.

Anwar quoted the AfDB President, Dr Akinwumi Adesina, as making the disclosure when he paid a condolence visit to the governor on the death of Alhaji Sani Dangote, the younger brother of billionaire businessman Aliko Dangote. 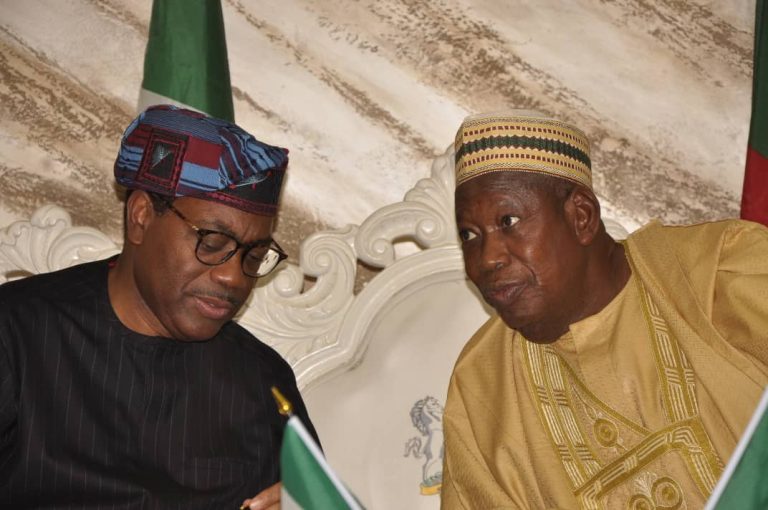 In the statement, Adesina said, “In all, we are having about $563 million dedicated for our projects in various states in Nigeria.”

“We are using $110 million for our programme on Special Agricultural Industrial Processing Zone in Kano.

“The funds will be invested on rural roads, transport infrastructure, water and sanitation, and in agriculture to increase productivity.”

He said that would also assist to create job opportunities to people and develop infrastructure in rural areas.

Responding,  Ganduje commended the AfDB President for the project and assured support and cooperation of his administration to ensure successful implementation.

“When institutions are strengthened and individuals or groups of individuals are directly impacted, this is what we mean by genuine development,” he said.

He also thanked the AfDB President for the condolence and for appreciating the developments recorded in the state.

“We thank you for appreciating our modest development since we came into office in 2015.

“I was Commissioner for Works, Housing and Transport for six years during military administration.

“So, my dream is to promote Kano into a Mega City, which is not only a collection of the population but also, a collection of an environment where things are working, where traffic flows, where health services are excellent.

“This is aimed at reducing medical tourism abroad and where you can have security using technology,” he said.