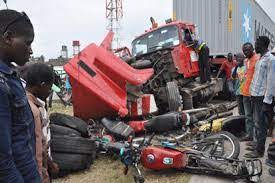 An accident on Sunday night involving a truck and a commercial motorcycle has led to the death of its unidentified female passenger at the Joju area on the Abeokuta – Lagos Expressway.

In an interview with the newsmen in Ota, Ogun, on Monday, the Federal Road Safety Corps (FRSC), Unit Commander for Sango-Ota, Mr Akeem Ganiyu, confirmed the death.

Ganiyu said that a mini truck, with no registration number, carrying sugarcane, hit a commercial motorcyclist from behind at 11.45 p.m. on Sunday, which resulted in the death of the passenger, an unidentified woman.

The unit commander disclosed that the two people in the truck and the rider of the commercial motorcycle were however unhurt.

“The corpse of the victim has been deposited at Ifo General Hospital morgue in Ogun by the Police in Sango-Ota,’’ the FRSC unit commander said.

Ganiyu attributed the cause of the accident to dangerous and reckless driving by the truck driver.

He cautioned motorists to avoid reckless driving and speeding to avoid mishaps.

Ganiyu also urged commercial motorcyclists to always exercise patience and use their helmets to prevent unnecessary loss of life.